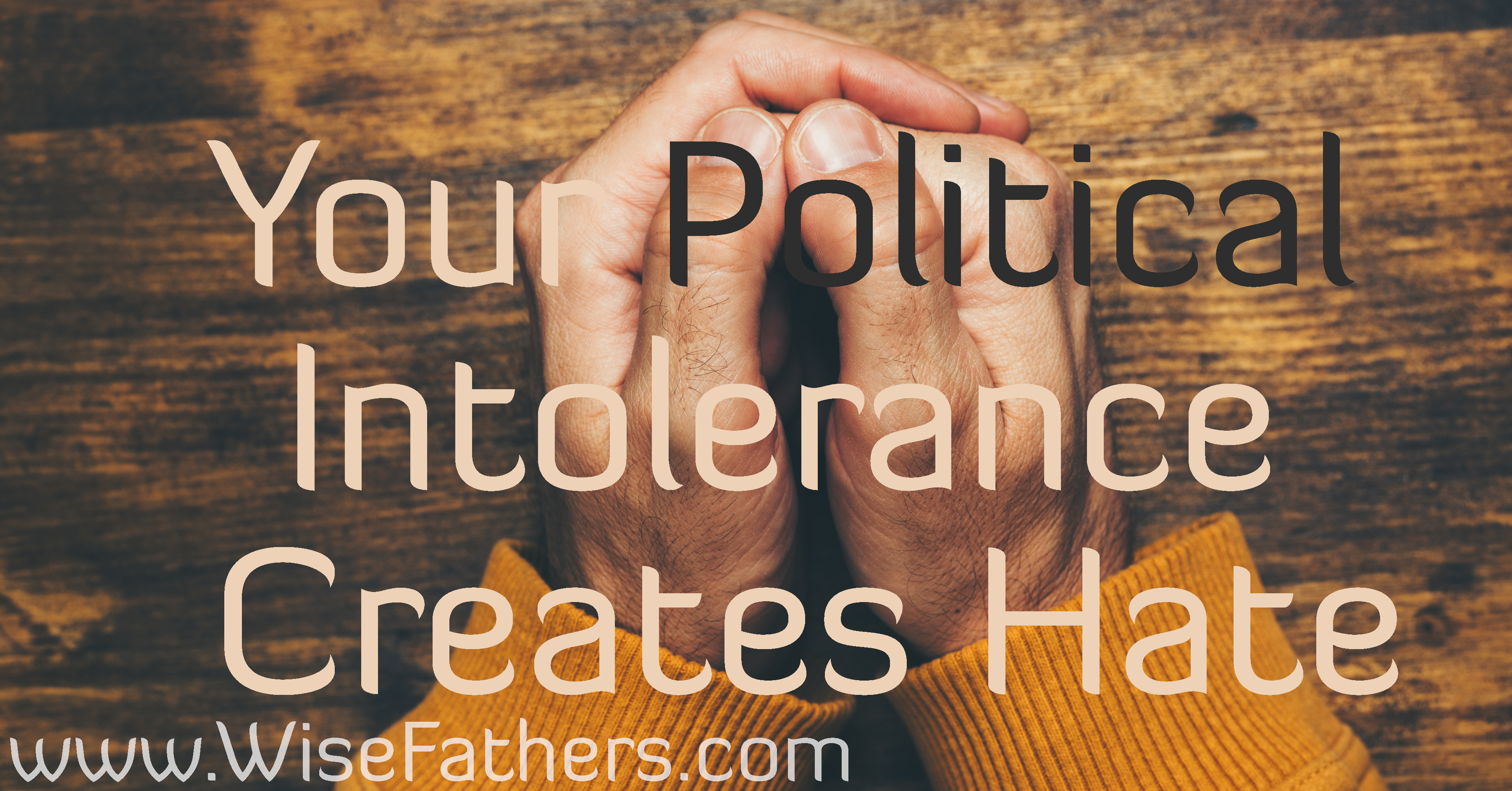 But here’s the thing: not once – ONCE – have I ever said things like “if you voted for him, then you voted against me”, “if you are still willing to defend this dangerous deranged idiot, something is seriously wrong with you”, “I can’t express how much I hate these people. I will never forgive them for what they’ve done to this country” – nor do I tolerate those comments from others on my social media. (Those are an actual comments people I know in real life have on their Facebook walls.)

I have seen a spate of these comments recently. I have seen years, now, of posts about how anyone who doesn’t oppose Bush/McCain/Romney/Trump (whoever the current candidate is) and everything – every.single.thing. – he supports is a racist, homophobic, greedy, scumsucking, child-killing (on account of opposing Obamacare), evil, anti-American hater, coward, and most likely closet Nazi and member of the KKK.

Here’s the point I want to be very, very clear about: I want to hear all sides of issues. I WANT to understand opposing points of view. I may never change my mind but I WANT to know why you believe what you do so we have the best chance of reaching a solution that works for everyone, and sometimes I do change my mind. But when you say I voted “against you” or there is something “seriously wrong with” me based on nothing more than support of a specific policy or politician, YOU have stopped the conversation.

When YOU are not willing to listen to anything I (or anyone else who holds a different opinion/belief than you) say, ever, then how on earth can we EVER find common ground? If your response to someone disagreeing with you on climate change, gun control, immigration, or any other hot-button topic is to say “we have nothing to discuss” or to insult them and refuse to talk, you are part of the problem – and I really don’t care what side of the issue you are on. Genuine discussion of issues is critical to democracy.

We all get it – there are racists in America. That isn’t exactly a new development but most people seem to agree that after decades of lessening racism and racial tensions, racial tensions have flared since Obama was elected, well before Trump started running for office. In my opinion, all the pontificating by the media and in social media about how “common” and “acceptable” racism has supposedly become is the reason so much of that hate is on display. People argue that simply hiding racism doesn’t eradicate it, which is true, but when something is on public display, it grows and spreads. Hiding racism won’t end it but it can help slow or even stop the spread of it.

“Mixed race” marriages are common now. If there really was still some huge social stigma, then there would be an issue when they happen on popular TV shows and there just isn’t. Can you even imagine if the mixed-race couples on today’s Hollywood Red Carpet had been on TV and in magazines in the 60s and 70s? Today, people would give you a blank look if you mentioned mixed-race couples as an issue. Racists are outliers now, not a sign of what the mainstream finds socially acceptable.

If you think I am being willfully blind, that conservative racism definitely reared its ugly head in opposition to Obama, read this fascinating Harvard article in HuffPo. The researchers looked for, and failed to find, racism in a group of older white Georgians interviewed specifically to learn about their racist opposition to Obama. These Harvard researchers concluded “the press and elites continue to look for a racial element that drives these voters’ beliefs – but they need to get over it.” Their words, not mine.

Most people know racism isn’t magically all-gone but you have to be incredibly delusional to think the situation hasn’t improved drastically in the last sixty years. Acting like it hasn’t does nothing to reduce racism going forward. Claiming every single person who voted for Donald Trump or supports his policies, or conservative policies and politicians in general, is a racist makes you look like an intolerant, delusional ass.

Blaming all conservatives or Trump supporters for every racist, potentially racist, or can-be-spun-to-seem-racist act that happens just make everyone more angry for no good reason.  In fact, one of the “rises in hate crimes” attributed to TRUMP supporters early last year was a series of attacks on Jewish cemeteries and bomb threats. The only person I found who was accused in these crimes was a man whose “Twitter feed is full of rants against white people and Trump.” He is most definitely not a Trump supporter and Trump supporters were as horrified as any other group by what happened.

We Can Be Different And Want the Same Thing

When you post links like this one on “I Don’t Know How To Explain to You That You Should Care About Other People” without a single comment questioning the article…. You are fomenting hate. You assume that just because I don’t want to do things the way you do and vote for politicians supporting policies your support that I don’t care.

You probably use disposable paper napkins instead of cloth and keep the water on for every single moment you are in the shower. You probably haven’t bothered to put special film on your home windows to reduce heat gain in the summer or replaced your curtains with ones designed to reduce heat gain/loss to lower heat and ac use. You probably don’t recycle as assiduously as my family. We all show how we care about other people, the earth, animals, etc. in our own ways and to different degrees.

I don’t accuse you of not caring about the environment because you drive a Pruis (I question the impact the batteries have on the environment) and have a longer commute to work while I work from home (zero commute) and use dryer balls instead of dryer sheets. People can work toward a similar goal, such as protecting the environment, in different ways. It’s not only OK, it’s probably more effective.

Just because people do it differently than you doesn’t mean they don’t care or that they care less.

When you are all good with all of Trump’s supporters being labeled “deplorables” but somehow a disputed use of “shitholes” in a private meeting where both sides used “salty” language is practically a cause for invoking the 25th Amendment and having POTUS removed for being mentally unstable, YOU ARE CREATING A CLIMATE OF HATE.

And here’s the thing: I would be angry if he had said that in a public setting, including Twitter, because he is the President. But he didn’t. He did it in a smaller private meeting where they were negotiating and trying to work through issues. And he didn’t say anything about the PEOPLE. Haiti lost TEMPORARY protective status. You see that word there – TEMPORARY? It means not forever. They were going to lose it eventually. It just happened to be now. It doesn’t mean he hates Haitians or Haiti or black people in general. His reported focus was making sure new immigrants will not overwhelm the system. His job isn’t protecting Haiti, Nigeria, Norway, South Africa, El Salvador, or anywhere else. It’s the US.

Don’t like it? Tough luck. This isn’t Star Trek. There is no United Federation of Planets, and there is no United Earth or Terra or whatever you want to call it. Maybe someday – we can all hope – but right now, the POTUS and the US government have to put the US first. Russia puts Russia first. China puts China first. Haiti puts Haiti first. Every other nation puts themselves first (in a few cases it’s a federation, as in the EU and formerly the Soviet Union), their allies second, major trade partners third, etc. We, as nations, work together more every year – but if the POTUS doesn’t put American first, as Donald Trump does, then no one will.

Do I like Trump? No. I do not particularly like Donald Trump and while I haven’t specifically asked, I don’t think my friends do either. But I do like his policies and our support is about his policies not about him as a person. Many of you don’t like him or his policies. I and many of my conservative friends are more than happy to discuss them with you and explain why we do, as long as you don’t attack us for it.

For the love of God, country, and all the things we all love, get over it. Your candidate didn’t win and your favored policies aren’t being implemented this year. Suck it up, buttercup. And yes, that goes for both sides.