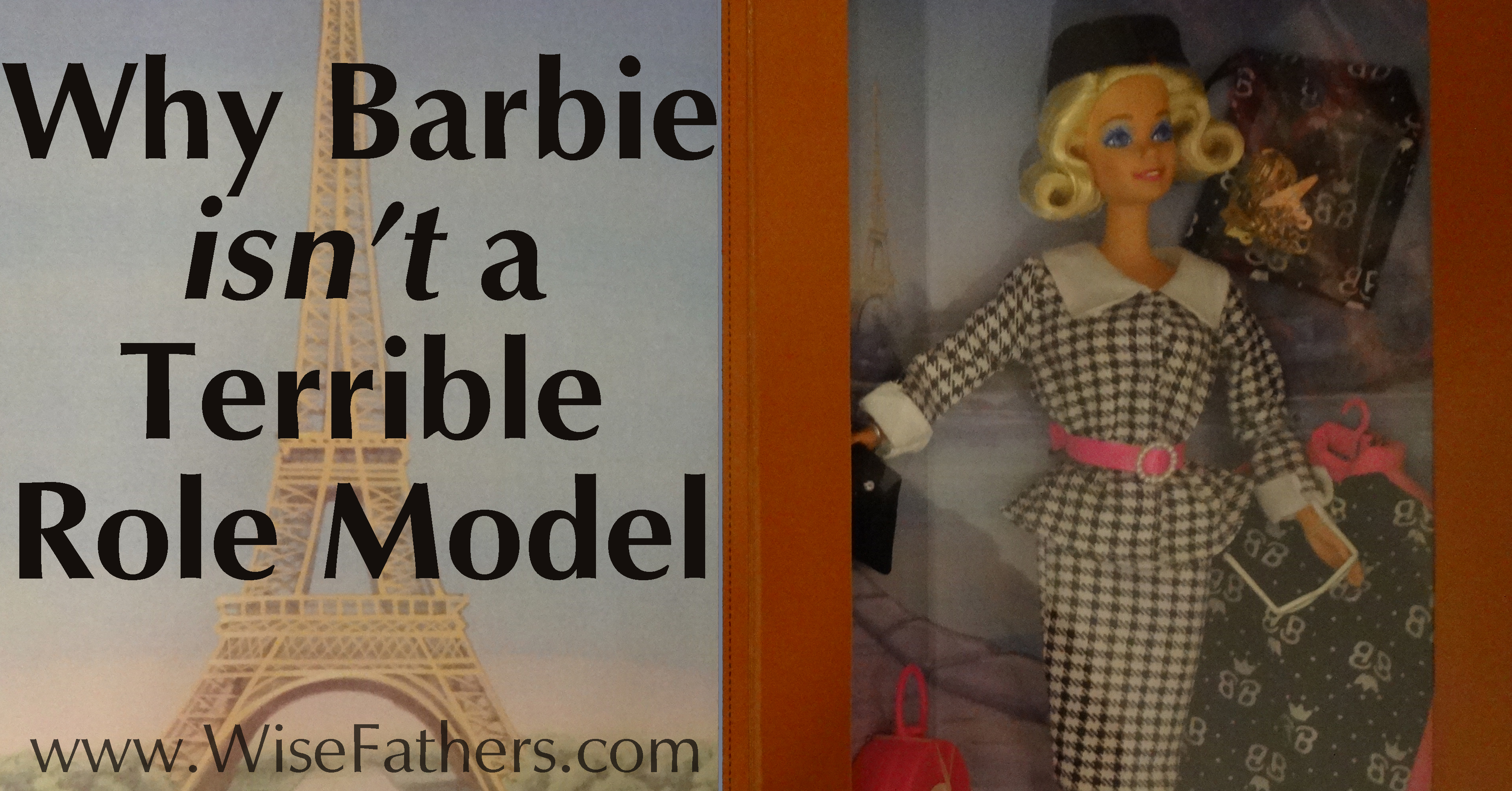 Barbie gets a bad rap from grown-ups because that don’t understand what little girls instinctively know: Barbie is a 3D paper doll, full stop. And that’s the crux of why Barbie isn’t a terrible role model: She isn’t a role model at all.

I learned a lot from Barbie playing with Barbies, but none of it involved body-shaming or bizarre body standards. For an 11.5-inch fashion doll to not look fat while wearing fabric woven for real, full-size humans, some of her proportions have to be skewed, like her waist. Of course, most kids don’t think it through but they seem to understand that Barbie isn’t meant to be a literal representation of a human body. If nothing else, her feet give that away, and so do the closures, Velcro or zippered. Can you even imagine wearing something with a zipper pull that goes from your collar to the bottom of your shoulder blades? Not the whole zipper, just the part you pull. Or Velcro that is three inches thick? Yikes. But that is about what those are like on Barbie, proportionally.

Have fun with your clothing! Barbie does, although no one needs that many ball gowns. Clothing can be changed and fashion definitely changes. And while I wouldn’t recommend it on a rainy day, it can even be made of Kleenex or toilet paper. Barbie dolls have come in every skin color with every possible hair color (including pink), although the vast majority are admittedly white and blonde.

I don’t know about other girls, but my Barbies wore ball gowns to all kinds of things. They hung out at home in them. While I wouldn’t recommend cleaning the bathroom in formal wear (as if Barbie EVER cleans a toilet, but I digress), there is no rule that says you have to wear sweats and look grungy just because you are at home. If a new dress makes you feel fantastic, go ahead and wear it for a day of sitting on the sofa reading your newest book or texting with your friends!

While Barbie got new clothing all the time, it didn’t stop her from wearing old favorites or borrowing from friends. If she (I) liked a dress, she wore it for many years. She also wore a lot of homemade items and didn’t hesitate to wear hand-me-downs from other Barbies, if they were cute.

One year, she had an entire wardrobe made out of Kleenex because I had fun making it. Unlike fabric, it was easy to “cut” (rip), sew (tape), and otherwise create forms I liked. Sadly, a spilled glass of water destroyed that wardrobe, but not the fun I had creating it or the happy memories it left. I also enjoyed making clothing for myself. It wasn’t haute couture, but that didn’t matter to me.

I remember reading a book about what a terrible role model Barbie is. It specifically talked about the “Friend Ship”. This was a 1970s passenger jet with Barbie’s name emblazoned on the side, and a male pilot painted into the cockpit. The book believed this plane taught little girls they couldn’t be pilots. It taught me that Barbie owned a private plane and Ken worked for her, as a pilot. Why dream about being a commercial pilot when you could dream of owning the plane and having your name emblazoned on it? Why not imagine running an airline? I credit my parents for my having this outlook, btw. While it may have made some little girls think they couldn’t be pilots, it genuinely never occurred to me to look at it any other way. You have the same power for your daughter(s).

Barbie has been many things over the years, including President, an astronaut, lifeguard, rock star, vet, and pilot. She has roller skated, gotten married, been a beach babe, played all kinds of sports, traveled, and raced cars. Barbie has RVs, houses, condos, pools, sports cars, and just about any other consumer good imaginable. Mine even had a motorcycle with a sidecar! (She, um, borrowed this and her helicopter from GI Joe after Joe’s owner left for college….)

The interesting thing if you look at Barbie’s possessions is that most of them are fairly small, including her houses. Elevators aside, Barbie isn’t teaching anyone that they need a 5000 square foot house, although they probably need an entire room as a closet and could end up with unrealistic expectations for their shoe collection. (Who has a different pair of shoes for every single outfit?) In our admittedly materialistic modern culture, Barbie really remains all about the clothing (which she is totally willing to trade with friends) and not as much about all the other stuff.

She has jobs. She has interests. She travels and visits places. Yes, she is far too often white and blonde. Her waist and proportions aren’t realistic. Her feet are molded for high heels. In short, she is completely unrealistic, physically, and definitely not a model of what girls even can possibly look like. But that’s not the point. She’s a three-dimensional paper doll. She’s a way to imagine things they can do, like being a paleontologist or Olympic gymnast. She lets little girls pretend they are visiting far away places of living in times gone by. They can create homes and furniture and all kinds of things for Barbie using whatever they find in their home, just like I created a facial tissue wardrobe for her.

Did you know that Mattel created a bald Barbie for little girls going through chemo? It was distributed directly to hospitals and they started making them a second time based on a heartfelt plea from a mom.

So, is Barbie a role model? No, she isn’t. She is a way for little girls to dream and imagine things they want to do and wear. The first female President I remember was Barbie. So, the next time you are getting annoyed by Barbie, being pestered by people who think Barbie is terrible for little girls, or generally trying to decide if it’s the worst idea ever to let your little girl have Barbie, think back to all I’ve said here. There’s a reason she remains popular, and I think it’s because she helps little girls dream big.

But I know at least part of it is because she’s got an amazing wardrobe. Just be glad she no longer has the 1970s-era shoes with a tiny, easily-broken closure. Those things were awful!