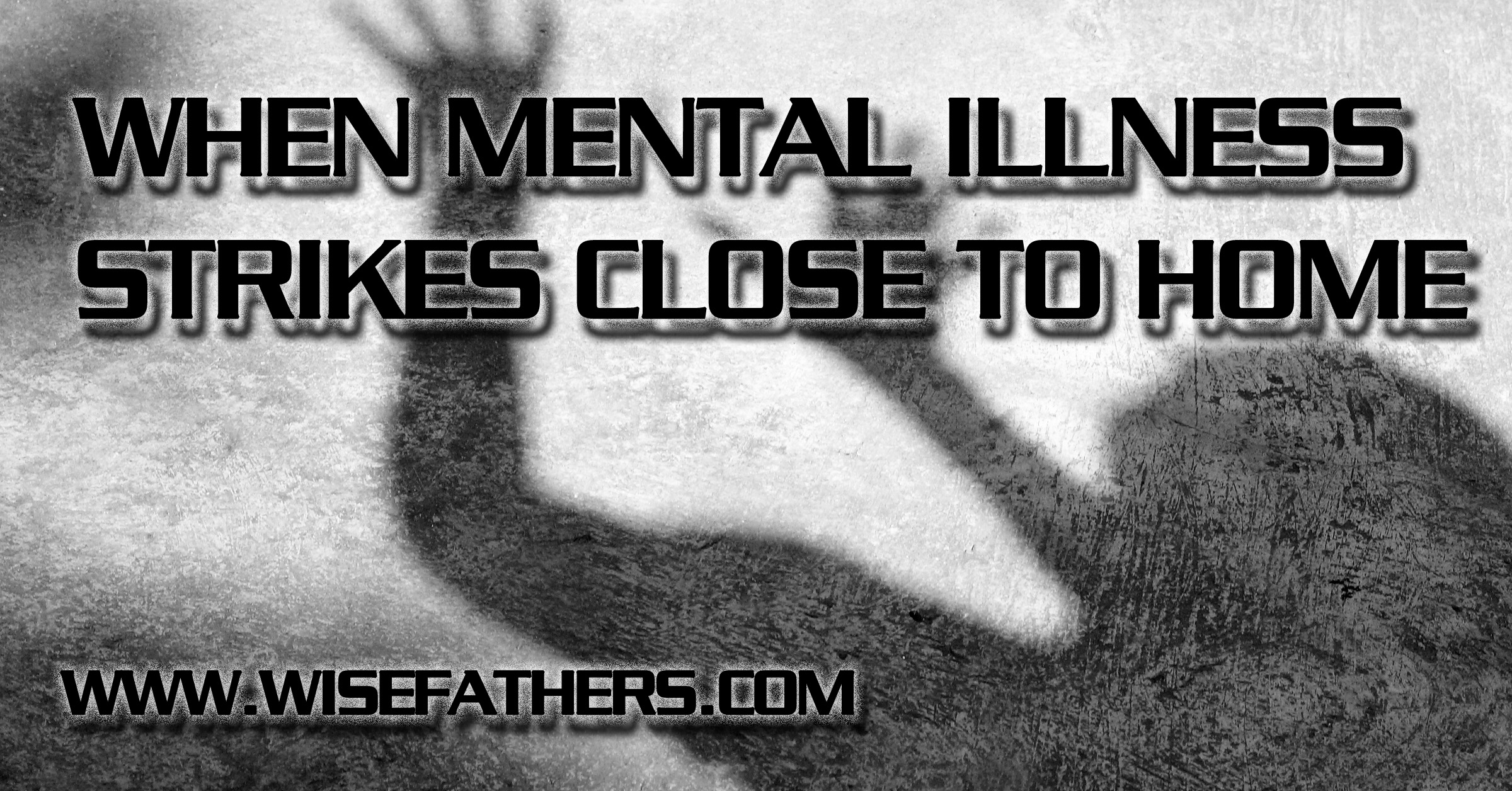 When mental illness strikes close to home, it can be hard to know what to do. The first, and sometimes hardest, step is recognizing that it really is mental illness. When mental illness gets scary, it’s more than depression or anxiety. In the cases that impacted our family, it definitely involved delusions and paranoia. Thankfully, it has been people around us, not family members.

A person we see regularly (and unavoidably) is struggling. There have been incidents on and off for years, but we could ignore them as just being an angry person ranting. That changed around the time he started accusing us of listening to all his phone calls. Riiiight. When he started yelling at our kids about the things we were supposedly doing, that was the end of our sympathy for with him. You DO NOT mess with the kids. The really sad thing is that he’s a very nice guy, when he isn’t having an episode. The difference between the two versions of him is stark, and we haven’t seen much of the “nice guy” in nearly two years.

Nothing in this post should be taken as legal or medical advice.

When it starts to get scary, it’s time to call the local police to start a paper trail in case things continue to worsen. You should use the local non-emergency number not 911 unless you are in imminent danger. If you find yourself in a similar situation with an increasingly erratic, possibly mentally ill or even dangerous, person you cannot avoid, having a frank conversation with a police officer is a good place to start. They can listen to the specifics and give you some advice on what to do. Just remember to call the non-emergency number not 911 unless it is truly an emergency. The officers will know the local and state ordinances for your area, as well as local resources available to you.

What you don’t want is to have years of verbal abuse or altercations that end with the police being called on you when and if it escalates to a physical altercation. You also don’t want your kids to think it’s normal and acceptable to have people verbally abusing, even threatening, you on your own property. If the police have a record of past incidents where the other person was delusional and/or abusive, and steps you have taken to avoid confrontations, their reaction will be substantially different than if the first thing they hear is an accusation against you.

The officer we spoke to said calls like this have become a daily occurrence but that most of the calls are made by the delusional person. I am a trigger for the person in our life. It seems to simply be that he sees me more often than the rest of the family. Sadly, we have been forced to alter our daily routine (including the kids) to avoid areas we are likely to see him, but it keeps us safer.

It’s important to remember that most mental illness doesn’t lead to violence. That qualifier is the problem, of course. Some mentally ill people are violent and others are triggered to violence by things neurotypical people wouldn’t even notice and warnings are easy to miss, or non-existent.

The more you can avoid a mentally ill person, the better, especially if you are a trigger or fixation for them. That includes online and phone interactions as well as in-person. Unfortunately, sometimes that simply isn’t possible. It might be because you work in the same office, live in the same neighborhood, or are simply unfortunate enough to run into them in the community on a regular basis. A person who is clearly mentally ill and verbally abusive to those around him frequents our local library. The librarians can’t avoid him while they are working, nor can community members who use the library, unless they alter their schedule and actively avoid him in the library.

The most difficult situation is when it’s a family member and they are resistant to getting medical help. If this is the case, find someone who can help you stay safe. If it’s your family member, you need to get a diagnosis to have a better idea what you are dealing with. Of course, it’s best if they are also medicated, but the mentally ill are notoriously difficult to keep on a medication regime, especially if their disease makes them paranoid or delusional.

It’s a statistical fact that spouses, children, and close family members are the ones who are at the greatest risk from a mentally ill person, so make sure to take care of the rest of your family while you are helping your loved one. If it’s a family friend, know that their loved ones may need extra help and support, including their kids.

Many states have a network of service providers who help mentally ill people. Your state may have something similar. When you talk to the police or medical care provider, ask them what your state has available. Health insurance companies may have specialized services they recommend as well. In addition to generally being lower cost, these community networks have emergency services that are available 24/7 without being forced to go the Emergency Room, waiting there for hours, then finding out that they want to keep the patent in-patient but they don’t have any psych beds so you are being transferred to another hospital. That gets very expensive, very fast.

If it is a child, be prepared because the medical community isn’t, and they know it. There are very very few hospital beds available for kids in mental health care units. They are literally few and far between. They may be transported to a hospital hours away from your home.

The first step will probably be seeing a counselor because there are so few psychiatrists available. Most counselors are not MDs (psychiatrists are), which means they can’t prescribe medicine. Primary care doctor (including pediatricians) can. There are many more counselors around than psychiatrists, which makes it easier and faster to get in to see a counselor. That doesn’t mean easy or fast, though, so be prepared for a wait. If the counselor thinks they need medicine, they can provide a note with their diagnosis for the primary care doc who can write out a prescription, if they agree, which is usually the fastest route to actually getting medication. Waits for psychiatrists are normally several months outside of a hospital setting.

Whether it’s a co-worker, a family member, or someone else, document what happens. Keep a log and videos (where possible) of their symptoms and your interactions with them. This is clear evidence of their disease and how it is progressing. Log all of your interactions. If you ask other people about their interactions with them, record what they say and when you spoke. If you end up needing a court order, including a No Trespassing Order or a Restraining Order, having this information will make it faster and easier. It will also make it easier if you have to defend yourself against false claims by the mentally ill person.

Include the date and names of anyone else involved. If others have incidents, make a note of those as well. If you or anyone in your family, including your spouse or kids, feels in danger, tell the officers when you see them and include it in your log. If appropriate, take photos and keep a file of them. For instance, if they are accusing you of hitting their car with yours, take photos showing your car has no damage consistent with the accusation and include the date. If you can take a photo of their car showing it doesn’t have any damage, so much the better, but don’t trespass or aggravate them to get the photos.