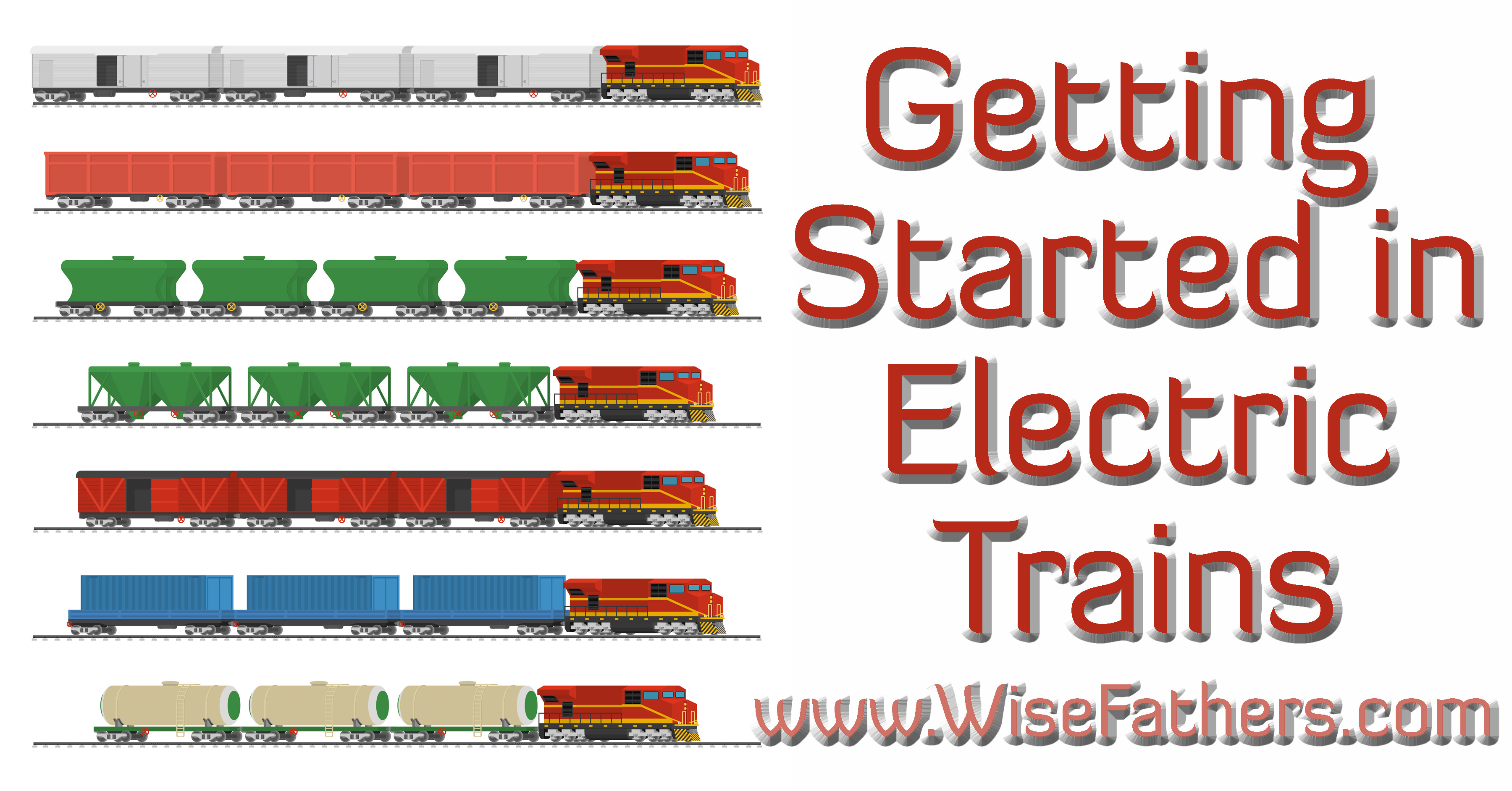 Getting Started in Electric Trains

You can name everyone on the Island of Sodor. You know who is emerald green, and who causes confusion and delay. As much as your child loves Thomas and Friends, they are getting bigger and you think it’s time to try electric trains, but you don’t know where to start. Our experience is that it’s both easier and cheaper than you might expect to get started in toy trains.

The first and most basic choice is the size, or scale, you want to buy. You can’t mix scales because trains only fit on one specific size of rails. One other important point to notice is the coupler used to connect cars on a train. Most scales only have one or two common types, which makes it easy, but it is important to be aware of.

HO is the first stop for most kids who want to get into electric/model trains. They are small enough to fit in little hands, but not so small they are easily crushed. Most importantly, you can buy a complete set for under $100 at big box stores and major toy stores. That includes the engine, cars, track, and controller. Any of those items individually can cost more than $50 in a train store, primarily because they are much higher quality. While HO can be quite expensive, my experience is that they are the least expensive to get started with.

HO is a train scale. Train scales refer to their ratio to the real thing. The “real thing” is also referred to as the “prototype.” The term “gauge” is also used but that is more accurately the distance between the rails.

Remember the Lionel Trains that always run around the Christmas trees in old movies? Those are something called “O” scale. “HO” scale stands for “half O” because they are half the size of O scale. HO is the most popular scale in the USA, but it isn’t the only one. The largest reasonably common one for home use is “G” scale. The “G” stands for “Garden” because these are designed for use both indoors and outdoors, with the track sturdy enough to handle the weather. Lionel’s O scale is the next largest with the S (or “standard”) used by American Flyer being a bit smaller.

When you look at antique trains, American Flyer and Lionel were two of the early industry leaders.

HO is the next smaller after that and is the biggest one that a child can easily hold in one hand. The two smaller scales are N and Z. Z scale is really small and rarely used. N scale has become very popular for the simple reason that it doesn’t need nearly as much space.

Finally, while it isn’t included in most discussions of toy trains, are electric Lego trains. These have the obvious advantage of being rebuildable, but they are also easy to break and nearly the same size as O scale. Since they are Lego, they aren’t cheap. Of course, they are also customizable and can look any way the builder imagines.

When you are looking at these sets, you will see that there are a lot to choose from. Which one is best? The one your kiddo loves. I believe our son’s first set was a freight train, but it was quickly followed by several more making it hard to remember. It was love at first sight.

The advantage of small scales is that they take less space. The disadvantage is that they lack the detail that is possible on larger trains and with larger layouts. For littler kids, N scale may simply be too fragile and too difficult to get on the rails. On the other hand, O, G, and S may all be too large and heavy for them to handle without help.

Our first purchases after a $50 set (at the time, now it’s $80-$100) were all used trains from eBay. I bought used track as well, but that was ultimately a mistake because I bought the cheapest track I could find. That track is actually designed for creating permanent layouts and works well for that, but my son was setting up and tearing down his layout, not creating a permanent one, so plastic tracks that snap together were a much better option.

As a parent, the most important thing to keep in mind when you are getting started is that electric trains can’t be run directly on carpet. The fibers get into everything and muck it up. All you need to do is put down a tarp, large piece of plastic, or even a sheet for the train to run on, but it’s important that you take the time to do it. If you set up the trains on a table or hard, flat surface (as opposed to a carpeted floor), it will make life easier because the trains won’t derail as easily.

Those inexpensive sets are an outstanding place to start for little kids, but if your kid continues to love trains you will end up spending more – so very, very much more – on their trains. On the plus side, they hold their value better than most kids’ toys so you can definitely sell them later if/when interests change, and they are readily available used.

When our son was a preschooler, we bought him many trains and a ton of things to later build an HO layout, primarily on eBay. As it turns out, he likes Japanese trains and N scale is far more popular than HO in Japan for the obvious reason: it takes less space. As a result, we now have N scale. At some point, he will almost certainly sell all the HO items and put the money into N scale.

Once he was old enough to focus in on one scale (N), we started buying better quality track (Kato) and buildings in preparation for building a layout. We initially focused on good track, switches, a transformer, and other basic pieces because those are the same no matter what the layout looks like and he decided on a scale before he settled on a layout style/location/era.

A few years later, he really focused in on high-speed rail and Japanese bullet trains. That’s when we started buying him really good trains. Since he was in middle school by then, we had no worries about how he would treat the trains and he did all the research to find the best prices himself. (He knew that the better the prices he found, the more rolling stock he would get; this was a solid motivation for him.)

Our son has loved trains since he was a literal babe in arms and he’s far from the only one. If you have a train nut, embrace it and have fun with it! It’s so much better than fighting it and they can learn so much from trains.

This was our first post on trains, but it won’t be the last. Please sign up for our emails so you know when we post about them again.