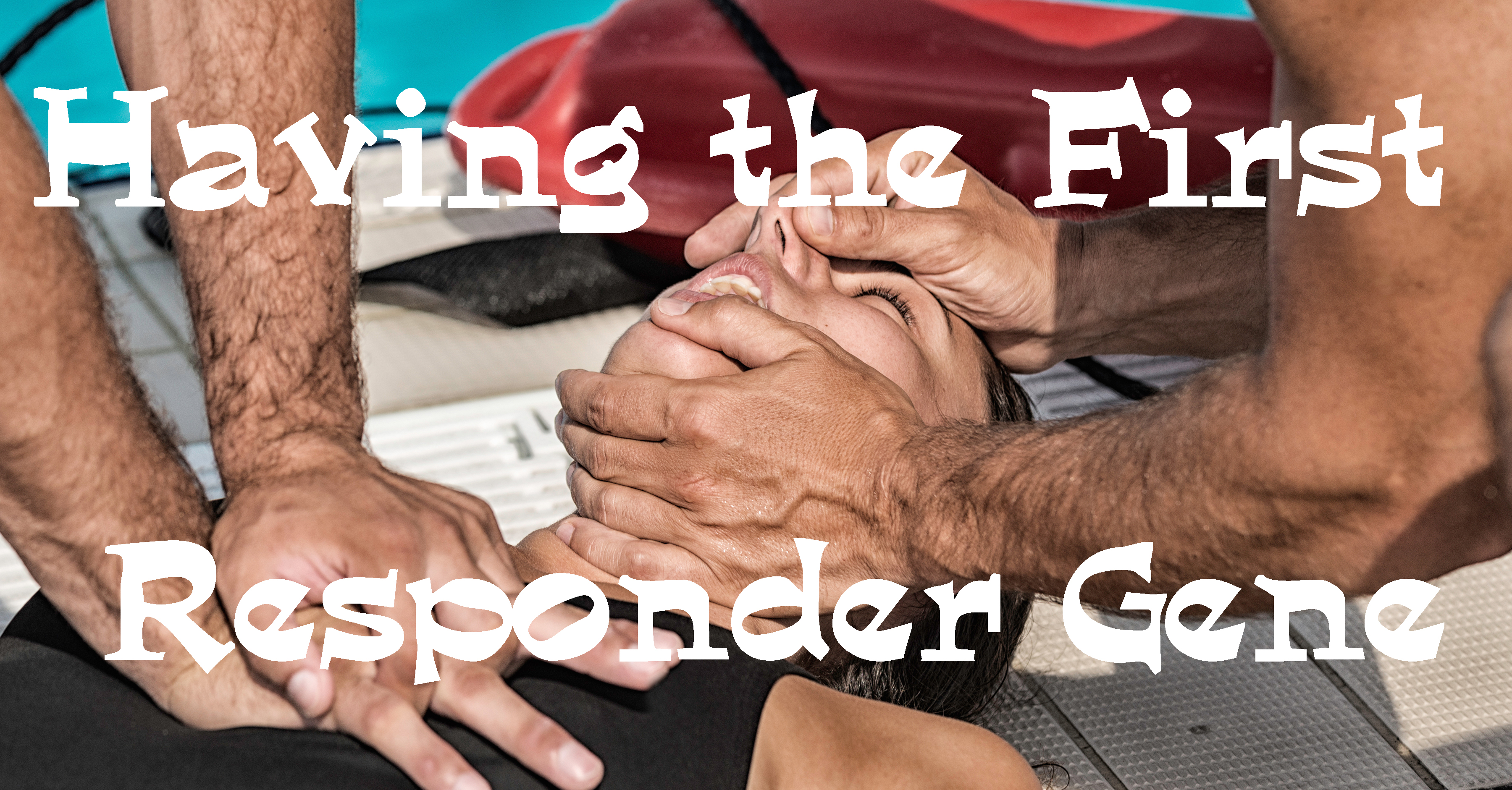 How would you react in a disaster? Would / do you freeze, panic, or act?

I don’t know what the term is, really, but I’ve always thought of it as having the “First Responder Gene”.  It doesn’t have anything to do with working as a First Responder – EMT, Firefighter, etc. – but rather with the ability to act and take control in a dangerous or life threatening situation. Most people freeze, which doesn’t help, or panic, which tends to make things worse. Only a relatively small number really take productive action.

You probably have a good idea which category you are in, but you may not know for certain if you haven’t faced an actual life or death situation. I have the First Responder Gene. While it’s great in most ways, people don’t necessarily know what to think of those who do act.

One big caveat: These are my personal experiences, not based on research or a study of any sort.

This was not an easy post to write, and it probably won’t be an easy one to read.

Is it truly instantaneous? No, it isn’t, but it is a real and visible change. When I was in maternity triage before my second son was born, I saw the change in the nurse taking my blood pressure. It was 210 over 108. When she saw that, there was a moment (possibly as long as an eye blink, literally) when she froze. I saw it, although I only realized what happened in retrospect. After that, her entire demeanor was different.

Doctors and medical staff normally have a certain amount of “bed side manner”, even if they are bad about it. That evaporated and the staff were all purely clinical and totally efficient. Anything extraneous was ignored as my care proceeded much more urgently from that moment on. My baby and I were clearly in imminent danger.

The two times I, personally, have been the one responding, I remember recognizing a life-or-death situation and immediately after that everything inside me froze, for a lack of a better way of explaining it. As it unfroze, I was in a true emergency response state with emotions locked away. Any non-vital details or information did not register and my body did a lot, even CPR, without much (if any) conscious thought.

I remember looking down and seeing my 4 week old son’s blue face and the blood around his mouth and nose. I remember my conscious thought processes freezing in shock and then returning. I know that I started performing CPR (chest compressions) on him and telling someone else to call 911 even as my mind processed what was happening.

To state that again another way, I was responding – both speaking and acting – even while a large part of my brain was still trying to process what was happening.

It was almost like what I would imagine an out of body experience would be like. Then the rest of my conscious brain and volition came back online, except the emotional part. That remained blocked away for as long as it had to.

How You May Be Perceived

When you have a non-breathing infant, the 911 Dispatchers automatically call the police and they join you at the hospital. What the police saw wasn’t a parent actually staying out of the way to let the professionals do their job and save a life. They saw a heartless bitch who didn’t feel a thing for their child and probably did something to cause this.

So did the hospital staff.

As a result, the doctors decided they had to x-ray every bone in my son’s tiny body – despite the fact that he was already going to be admitted. We were lucky that our pediatrician, who had known us for years from our older child, was an attending at that hospital. He called them off and stopped the excessive extra testing, but they never would have listened to us. And their actions actually made him worse by traumatizing him needlessly.

As much as I wanted to hold my little man in the ER, letting him alone on the exam table while the doctors were in and out examining him was more important for keeping him alive. As soon as they seemed to be done for a little while, I held onto him, careful not to dislodge any wires or monitors.

It didn’t matter that I did everything nearly textbook-perfect in my response. Actually, that was the problem. They couldn’t accept that any parent could compartmentalize to that point.

My OB / GYN actually told us that we shouldn’t bother to take Infant and Child CPR for our own kids because no one could keep it together enough to perform CPR on their own child. If we took it, it would be (in his opinion) for other people’s kids. And realistically, almost none can. But “almost none” isn’t none.

When I helped my elderly Grandma when she had a massive stroke, they weren’t nearly as judgmental.

Don’t get me wrong – I understand how rare it is for a parent to be able to respond the way I do. I understand their suspicion. I’m trying to explain what it is like if you actually ARE one of those rare people.

I still have two living children, and my grandmother died with a lot more dignity than if I hadn’t been there when she had her massive stroke. My husband always says in an emergency he wants me there, and you (whoever he’s talking to) should too, since I move to improve the situation.

With that said, seeing a CPR dummy for infant and child CPR is distressing for me, especially if it’s unexpected, and not for the usual they’re-creepy reasons. Clearly, God was looking out for us and had our Guardian Angels on a close watch detail when He had me take that class for the first time just before my preemie was discharged from the NICU. The muscle memory was still fresh.

With my Grandma, there is no such issue. She was old and it was her time. She lived a full and happy life, up until the very last moment. I know I helped everyone in the family by being there to make sure she was comfortable and to help make arrangements for her, including calling relatives when she was taken to the hospital.

I am thankful for the first responder gene. I would never trade it away. My family knows that in an emergency, I will respond. Interestingly, there are several others in my family who we’re fairly sure have the same gene, but it’s hard to know 100% unless you are actually in a life or death situation.

But I have also learned that I need to address the perceptions of actual first responders and others when they see that I’m not hysterical and in their way while they try to work. They need to see the times I walk into the hallway, away from my child or whoever, and slide down the wall to cry, so they know it does affect me.

But my family knows that I will be there for them when they need me. I will not be curled up in a ball crying. I won’t be screaming hysterically. And I will never, ever be getting in the way of EMTs and other first responders who are trying to help them.