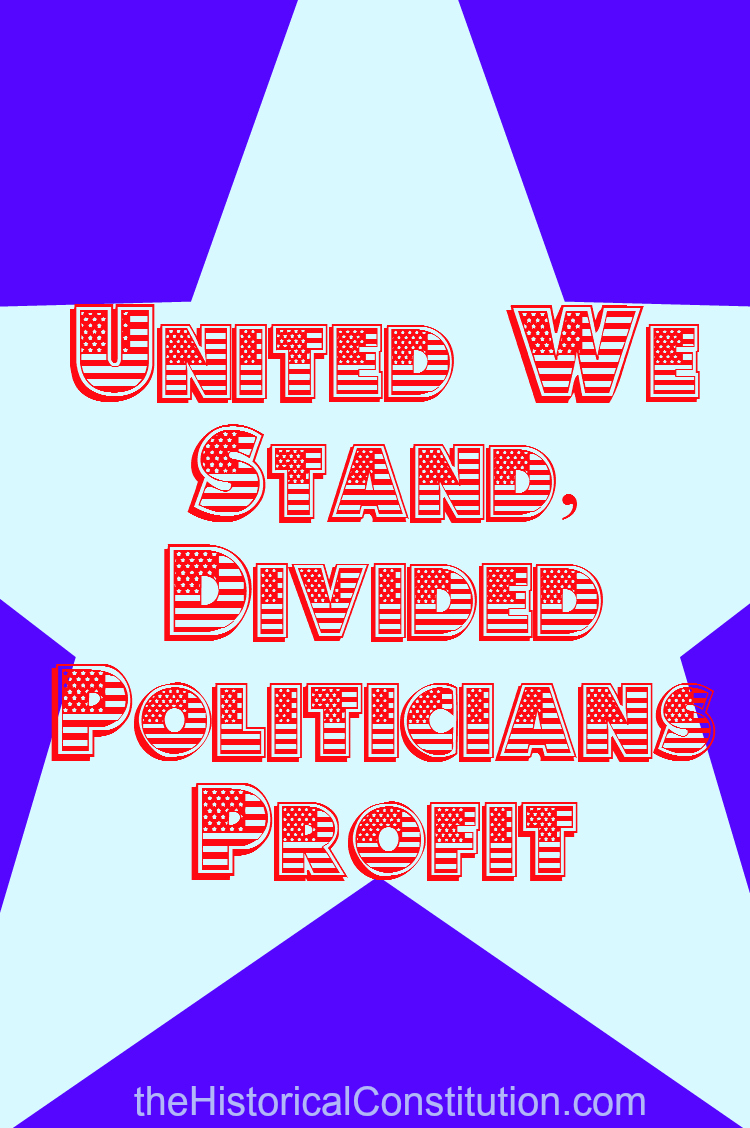 Featured General US History and Constitution

United We Stand, Divided We Fall. And Politicians Profit.

We have all heard the quote. Patrick Henry said it in the Revolutionary Era. The Allied Forces said it during WWII. And it’s still true. United we stand, divided we fall.

But today, it’s not an outside military force that is dividing us. It’s our own politicians and media.

Why do we play into it?

So, why do we keep playing into it? Why do any of us still defend either political party or claim they are interested in the interest of anyone other than themselves and their big donors?

I see it over and over: This wouldn’t happen if the Republicans were in power. The Democrats would never do that. The other thing is solely the fault of the President, or the Congress controlled by (insert party).

Our debt has gone up when both parties controlled the House, and the Senate, and the White House. We have been at war in the Middle East and had Guantanamo under both Republican Bush and Democratic Obama.

Why so little ability to agree?

As far as I know, we don’t have any major conflicts going on. Muslim terrorists keep attacking us, but they are attacking all of us, including American  Muslims. While some Americans want to avoid labeling the terrorists as being one particular group, or even calling them “terrorists”, I don’t believe that is really a broad-based conflict.

In News We Trust

We are used to trusting the media. They are the fourth branch of our government. They are there to shine a light onto the corruption that inevitably finds its way into every government.

Instead, they have chosen to shine that light into or faces to blind us, or onto something shiny and interesting looking to distract us. And far too often, it works.

And far too often, it divides us because each media outlet allows its own institutional biases to allow it to show, or hide, different stories. We don’t end up with the whole story.

Much like looking at a building facade used for a play or movie, what we think we know has no relationship to reality. By only hearing or reading one side of the story, we are hopelessly misled about the truth.