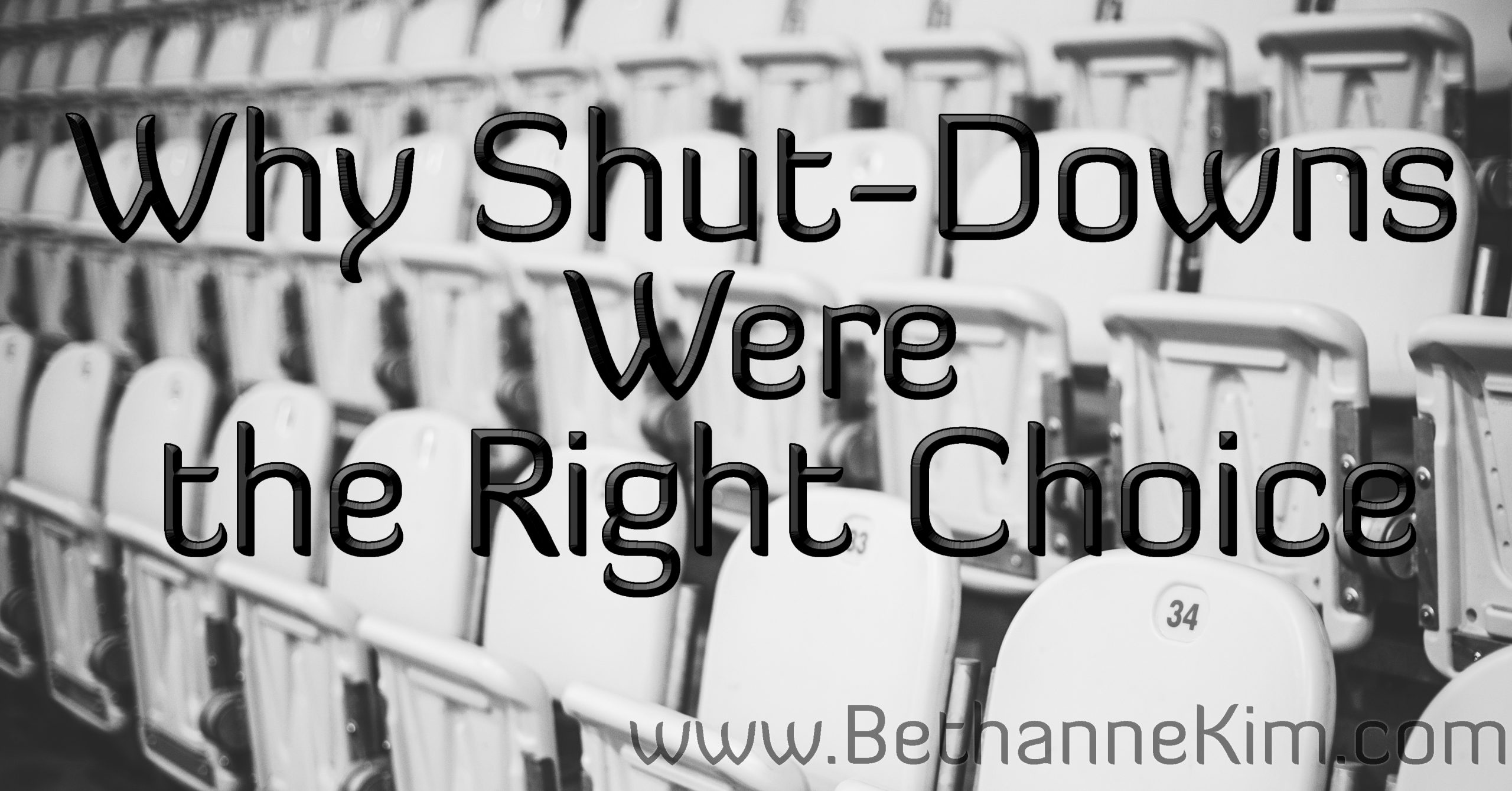 Why Shut-Downs Were the Right Choice

The shut-downs in areas with active outbreaks were the right choice, but four weeks was the right time frame. We have gone past that. WAY past that. (Areas that didn’t have a lot of cases were right not to shut down; there simply wasn’t a need to stop any transmission where there weren’t cases. )

We were told the shut-downs were to flatten the curve and give hospitals and medical staff time to prepare. We were told it was to give them time to work on a cure. And we were told individual states could make their own choices about having one or not.

Every government around the world panicked in January/February. Travel was restricted, quarantines happened, economy-destroying orders were enacted. The flu happens every year and other viral outbreaks happen every now and then (SARS, MERS, Ebola, H1N1, etc.). This hadn’t happened before. Something was different this time. It can’t be something specific to one country like wanting Trump out of office (US) or to silence protestors (China) because those wouldn’t have caused virtually every other country to panic as well. I believe, based on what I have read, that the world governments had a high degree of confidence that this was an accidental lab release. I don’t think they believed it was a bioweapon or quarantining would have been more rapid, but my conviction that the shutdown was the right choice starts from the belief that it was a known lab release.

This is the number one reason we were given to have everyone stay home and the economy shut down: we needed to flatten the curve. This is a reference to all the graphs showing expected infection, hospitalization, and death numbers. Most showed exponential growth with hospitals quickly overwhelmed by patients. The stated goal was never to entirely eliminate the virus during this period but more simply to give hospitals a chance to prepare.  “Flatten the curve” became part of our conversations, along with things like fomites and BSL-4 labs that most of us had never heard of a month or two earlier.

Flattening the curve was important for hospitals because they didn’t have enough equipment. They didn’t have the PPE (Personal Protective Equipment) to maintain their normal standards, which include fresh PPE for every person every time they enter a patient’s room. That includes changing to fresh PPE in between patients. N-95 masks are an important part of that, as are gloves, gowns, and something to cover their eyes. They also needed enough ventilators, ICU beds, and other equipment for all the anticipated patients. While nothing is ever perfect, they are in a much better position than they were in March.

This, to me, was the most critical reason for the lockdown. When it started, it seemed like the only thing we knew was that hydrochloroquine *might* help patients. *Might*. There are now ongoing clinical studies of that and several other drugs. There is also a lot more knowledge of how it impacts patients and risk factors. Certain blood types have been found to be more, and less, susceptible.

Studies have shown more of how it actually functions, which is helping researchers and doctors find ways to fight it. For example, COVID-19 frequently leads to asymptomatic hypoxia. Transmission via fomites is rare and sunlight kills the virus, but indoor areas where people are close together and air is recirculated lead to outbreaks. Those are things we didn’t know for certain in March.

Ventilator use has been shown to lead to fairly strong negative outcomes, leading doctors to use other treatments.

Anyone who presents with unusually low oxygen saturation levels and is otherwise asymptomatic for hypoxia is automatically considered to possibly have COVID-19, which is a good thing for getting treatment to those who need it more quickly.

There are a lot more tests available, making it easier for people to get treatment.

In March, almost nothing was known about this virus except that it started in Wuhan, China; it was very contagious; and it was killing a lot of people. While it is still a serious virus – worse than the flu because of the complications and side effects – a lot more is known about it now and it can be fought more effectively.

In March, people looked at me weird and clearly thought I was over-reacting by wearing a mask. By June, people not wearing masks were the ones getting weird (even hostile) looks.

Don’t get me wrong: The lock-downs definitely need to be over and people need to be allowed to return to their lives, but the shut-downs have bought time to better understand this disease. No matter what many want to believe, this isn’t “just another flu” – it is a genuinely novel (new) virus that has never infected humans before.

A virus this genuinely, and completely, new to the human body is rare. Finding the best ways to identify, fight, and eventually (possibly) prevent it will take time. Thankfully, it has been shown to not be very lethal for most people, but the lack of lethality doesn’t change how very, very nasty it is.

It has been less than nine (9) months since the first human host was infected with COVID-19. We actually have no idea what the long-term impacts of it are, but the lock-downs did help to flatten the curve enough for researchers and doctors to start finding out what was more (and less) effective to fight it in the short term. That includes determining that face masks are a huge help in lowering transmission rates. So please, even if you feel healthy, just wear a mask when you are with strangers or people with frail health and can’t social distance.

Previous Post
COVID-19 Winners and Losers: My Thoughts
Next Post
The Constitution: It’s the OS for the US