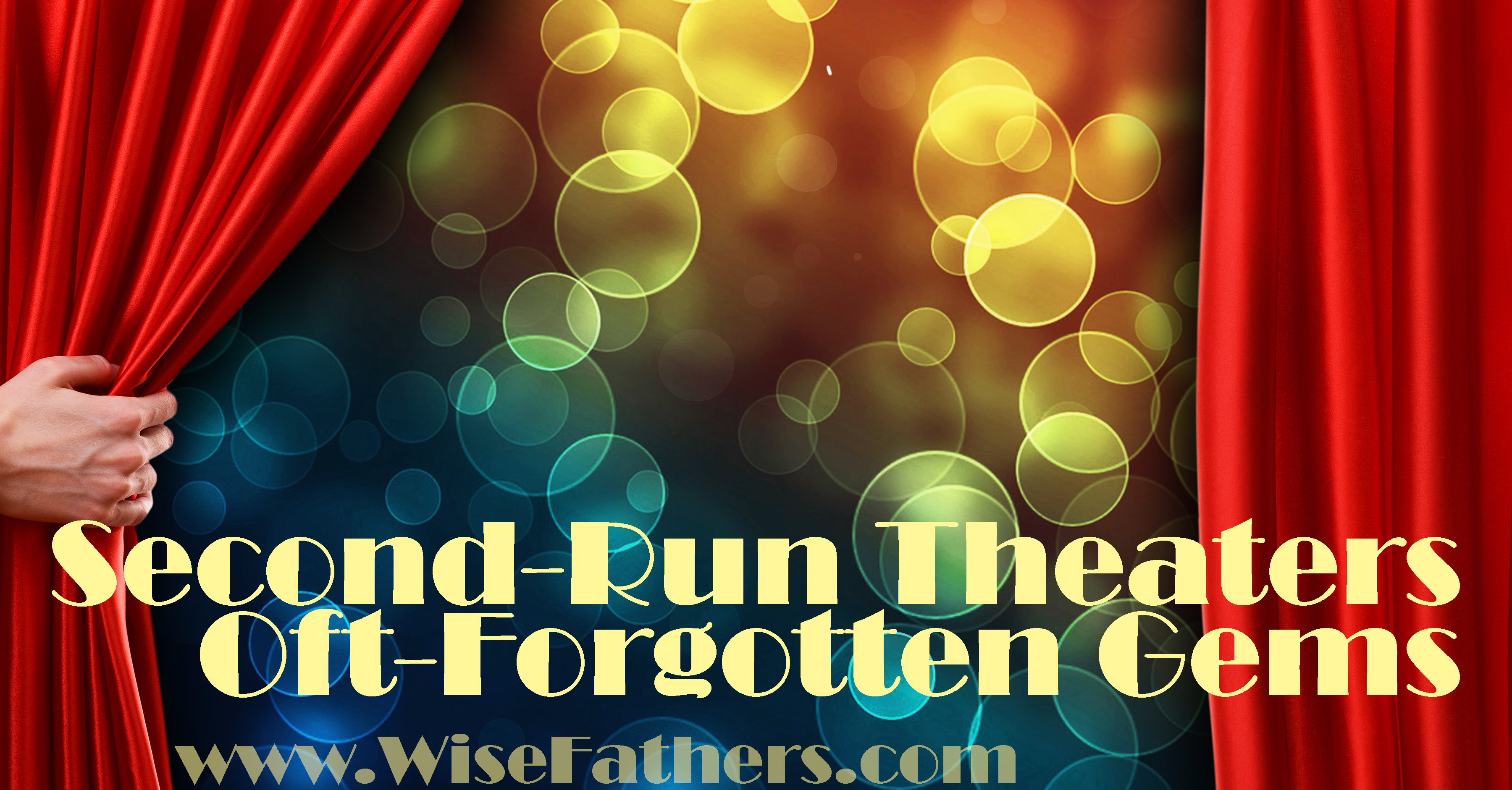 Stop paying $15-$20 or more per person to see the newest stereotype-reinforcing pile of poo from the big studios, especially while it’s still new in the theater! You do have other movie choices. Buying, streaming or borrowing DVDs come to mind, but that isn’t the same as seeing something on the big screen. And no, that doesn’t mean going to an art-house movie, unless that’s your thing.

Have you ever gone to a second run theater? Do you even know what one is? It’s where they show movies after they finish their first run, which means after they are gone from most major theaters. Thus, “second-run” theaters. When life is busy, we sometimes miss movies we really want to see when they are first released and second-run theaters let us see them on the big screen. More often, I balk at the high prices for tickets and concessions at first-run theaters and refuse to go. After all, for $20, we can buy the DVD when it’s released and that allows us to take potty and snack breaks without missing a thing.

Since it’s less than tickets alone for a family of four, I consider buying DVDs a bargain, but there is no denying that it’s fun to actually go to a theater and see a movie on the big screen with your family or on a date. At second-run theaters, the prices are far lower, sometimes only a dollar or two.

On top of the savings on ticket prices, concessions are less expensive. You know how the choices for drinks at the movie theater start at massive and get bigger from there? And the smallest boxes of candy are family-size? Not at a dollar theater. The candy is actual single-size and the drinks are sized for normal humans. I have bought snacks and drinks for me and my son for $5, total, for both of us. In a movie theater!

Drive-ins are another great option, in warm weather, as well as being family fun. The biggest bonus, of course, is that when you have a wiggly little kid, they can move around much more freely, talk a little, play with a toy…. As long as they are basically quiet and stay with you, it can be a much more pleasant experience with a little one than sitting in a regular theater. As an added bonus, you control the volume while watching on the biggest screens out there.

Drive-ins still tend to have double-features, and they have been growing in popularity in recent years. The first one is more family-friendly, which is another way of saying the latest Hollywood kid-film. Depending on the theater, they may even show first-run films. Some have play areas for kids to burn off some energy before the main feature starts, although they may date back a few decades so don’t expect anything modern or brand-new. For instance, there might be a metal slide that gets burning hot in the summer sun. A lot of modern kids are used to plastic slides, so they won’t be expecting that.

Since you are in your own car, it’s clearly pretty easy to bring drinks and snacks along, but modern multiplexes aren’t the only ones who need the concessions revenue to make money, and drive-ins and second runs often need the profits from concessions even more. Clearly, parents will always have some Goldfish and other kids’ snacks on hand, but try to at least visit the concession stand. They may have some fun old-school concessions you rarely see today.

The second run theaters I have been too are usually family-run operations in cool old theaters. Some even have balconies! Others have food and beverage service available, like a restaurant. Since they are older theaters, they tend to only have one theater and it’s a whopper. Going to them makes me think of the grand old movie palaces from the first half of the twentieth century.

Because of the size, selling out is less likely, there are more seats to chose from, and the “big screen” really IS a BIG SCREEN.  Some of the individual theaters at our local multiplex barely have 20 seats across the whole theater. That really isn’t all that “big.”

The local multiplexes also tend to have the volume set far too loud for most movies. I understand crowd size affects how loud the volume needs to be set, but it isn’t that hard to have someone walk in when the movie starts rolling to check the volume and adjust it if needed. But they never do. As a result, I find it can be literally a painful experience to go see movies, especially action movies. It is rare that I agree to see one in a first-run theater. I haven’t had that issue in second-run theaters. I don’t know why. It could be the much larger size of the room, or it could be that they have older equipment that simply doesn’t get that loud. Whatever the reason, I am truly grateful.

Since these are older buildings, they often have lovely architectural details you simply can’t find in newer buildings. The ceiling might be pressed tin. It might have murals or old artwork, possibly vintage movie posters. It is worth arriving a few minutes early to simply look around at the theater and talk about some of the differences, even when those might not be comfortable. That balcony that was so cool to my family? That might not have been to a family with black Southern roots. Under Jim Crow laws, balconies were reserved for blacks who were not welcome in the main seating area. While I love the look of tin ceilings, another family might have relatives who worked (and died) in mills or mines and those ceilings could start a conversation about that. In our family, we tend to simply talk about the architecture and what we do, and do not, like.

Perhaps my biggest reason (other than cost) for loving second-run theaters is that most are family-run businesses. Someone bought and runs it because they love it. They love the building, they love having people come see the movies, they love the movies. They probably love choosing the movies, too. There are a lot out there, after all, and they have to decide which to bring in. It is a business, of course, and they need to make money, but it just isn’t the same to me as a multiplex. The decisions aren’t just based on contracts and what is required. If the theater needs new carpet, they may have to skip a family vacation to make that happen, but they will take the time to choose the best carpet for that theater. It won’t be a generic choice for 500+ theaters, it will be for that exact, precise theater and no other.

Go online, see if there is a theater near you and check out a second-run movie with your family. Maybe you will find a hidden gem like my family has! Or perhaps you will simply finally visit a well-known indie theater you’ve never gotten around to visiting. Either way, it’s a new experience for your family and new experiences tend to be memorable ones.