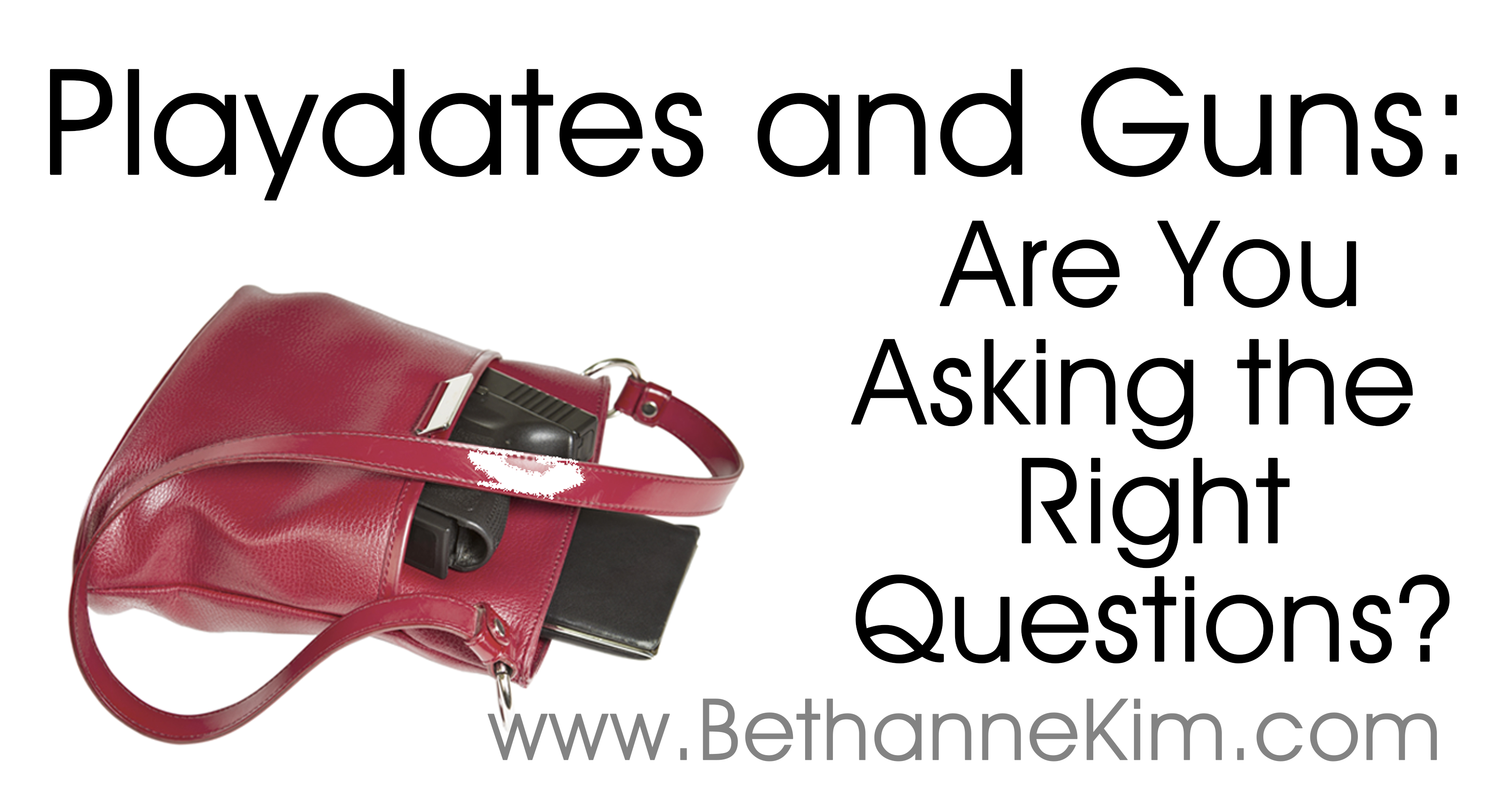 Playdates and Guns: Are You Asking the Right Questions?

I don’t know if you have seen it, but there a post made the rounds about a mom who was concerned that unsecured firearms might be laying around other people’s homes. The original poster is unwilling to let her kids play at anyone else’s home if they own a gun, unless she is satisfied that it is securely stored, meaning she has actually looked at where and how they are stored and decided it’s sufficient.

She really needs to ask herself if she is asking the right questions.

Moms can be worriers. In fact, they are renowned for it, so I understand where the poster is coming from. I agree that it is important to keep our kids safe from and around firearms, but that doesn’t mean I agree with her conclusion that it is reasonable to never have playdates at the home of anyone who owns a firearm.

Perhaps that is because both the area where I live and the one where I grew up are full of people who have guns, both hunting rifles and sidearms. It is probably safe to say that the majority of my friends growing up and my children’s friends today have firearms in their homes. No one I know has had a problem because their kids are taught gun safety, just like they are taught not to put forks in electrical sockets and all the other safety rules.

Playdates and guns were never intended to be mixed, real guns at any rate. Everyone knows that. No one knowingly lets a weapon where a child can reach it, but it’s like anything else that could be dangerous, such as cleaning chemicals or unsecured bookcases: A determined child who doesn’t know or follow the rules of safe behavior can be hurt or even killed.

Asking to walk around and look at the rooms you child will be playing in is perfectly reasonable. You may spot a potential danger the homeowner doesn’t. For example, if you child loves trains and there is a model on a higher shelf, they might climb to get to it when a kid who doesn’t love trains wouldn’t even notice it. That doesn’t give you permission to drag open every drawer in the house and rifle through the medicine chest, so don’t abandon your manners. If there is a gun readily accessible, you’ll be able to see it.

Asking if there are firearms in the home is OK, but know that not everyone is willing to discuss the matter. Asking to be shown or told exactly what firearms they own and where they are stored is no more acceptable (or reasonable) than being asked to be shown all the family’s cleaning supplies and where they are stored, including the rarely used ones hidden away in basement storage, or where all their family valuables (jewelry, etc.) are stored, just in case your little one might put one in their mouth. In fact, the valuables and firearms may be in the same place, if the family has a large enough safe.

In a conversation the poster recounts, a friend says that she has a loaded shotgun in the house “near the bed.” This is enough for the poster to decide to never let her child play there. “Near the bed” was assumed to mean “laying around and accessible.” There are gun locks and safes that can easily be kept and used “near the bed” but not accessible to children. Gun owners tend to know and follow the basic rules for gun safety. Yes, it is true that accidents happen and not all gun owners keep their firearms in a safe or otherwise locked up, but they are almost always kept in areas (such as the master bedroom) that neither children nor guests should be in if for no other reason than they are expensive. So that brings me to my bigger question:

Why do these parents think it’s OK for their children to wander into another adult’s bedroom and rifle through their things?

It’s a matter of simple manners that even toddlers can learn: You do not go into other people’s bedrooms. While toddlers can’t be trusted to follow that (or any other) rule, most parents I know stay with their kids for at least most of their playdates when they are that young. Since they are there, they should be watching their child and keeping them safe. Once they are old enough for playdates without their parents, they are old enough to stay out of “off limits” rooms.

The biggest problem here is that the author, and many who commented on the post, seems to expect to be shown exactly where and how any weapons are stored in another person’s home. That makes the gun owner and their family less safe. Honestly, if I had guns in my home and had the choice between showing how and where they were stored on-demand for playdates and not having playdates at my house, the choice would be easy. Someone else gets to clean their home and host!

If you aren’t a gun owner and aren’t around any, saying that it makes gun owners less safe probably sounds like nonsense, but it isn’t. Gun owners have three big reasons to fear having their firearms stolen: (1) they are expensive, (2) the thief could use it in a crime, and (3) the thief could sell it to someone else who uses it in a crime. In order to steal it, someone else has to find it first.

By showing every Thomasina, Peggy, and Harriet who stops over for a playdate and asks exactly where and how weapons are stored, gun owners massively increase the chances someone else will rob them because more people know what they have and where. Paradoxically, they also increase the chances of kids finding those same firearms and using them.

A casual chat on the playground about how “I felt nervous with Alex playing there, until Chris showed me that they keep their 45 hidden behind some dresses in a closet safe and the hunting rifles locked up in the back basement” can be overheard by anyone, including kids who now know where to find the “hidden” firearms. It won’t take too much effort on their part to find out who “Chris” is and where they live. Now there are illegal weapons in the hands of criminals or kids.

On top of that, it’s impossible to guarantee other people are telling the truth. Someone with 20+ guns could deny having any, and someone with no guns could claim to have some. There are no guarantees in life except death and taxes.

If you know a person has a firearm and they tell you it is “somewhere the kids aren’t allowed”, that should be enough information for you. If you know your kid can’t be trusted to stay out of forbidden areas, then it probably is best that they not have any playdates at other homes without you.

I know we have had times I was in the middle of a sewing project and some ill-mannered little cretin who ran into the sewing room could have been injured on scissors and other items left strewn about, even hidden under fabric. The sewing room is a guest room that children simply aren’t supposed to be in. It is not a playspace. It never even occurs to me that children might go in there because my kids don’t, and neither do their friends. However, a former classmate visited us and his son did decide to go looking into every room. No harm came of it, but those rooms hadn’t been child-proofed and could easily have had power tools or other dangerous (to kids) items accessible.

Don’t rely on other people! Train your kids to be safe around guns – and to follow the rules. If they know to never, ever, not even in jest, point a firearm at another person and follow that rule, that reduces the possibility of them shooting anyone to pretty much zero. If they know to always, always, no matter what, treat a firearm like it is loaded, that reduces the possibility of shooting someone to pretty much zero. If they know to go find an adult immediately and tell them if they see someone else playing with a firearm, that will keep them safer too.

If your kids understand – truly, deeply understand – and follow the basic rules of gun safety, you never need to worry about them playing with firearms because they won’t, especially if you let them have the chance to shoot in a safe environment such as a gun range. Yes, other kids might behave unsafely, but most people who own firearms teach their children gun safety. Teaching them firearm safety will go farther than simply refusing to have playdates.

While at a national park with the Scouts, some of the younger ones were climbing on a canon. Clearly, these are just for display, but two older Scouts (nine or ten years old) who had experience around firearms (air rifles) scolded them because “you always treat guns as if they are loaded!” Once they get it, they get it.

What to Do on a Playdate?

Instead of asking what firearms people own and where they are, ask all the kids at a playdate to tell you the basic rules of gun safety. This is a much better safety indicator. If the people own firearms, they will almost certainly be impressed by your concern. If they don’t and ask what you are doing, just tell them you’ve read stories online and this is how you keep yourself from worrying about kids and guns.

After all, it’s the truth.

Originally published on The Moderate Mom.