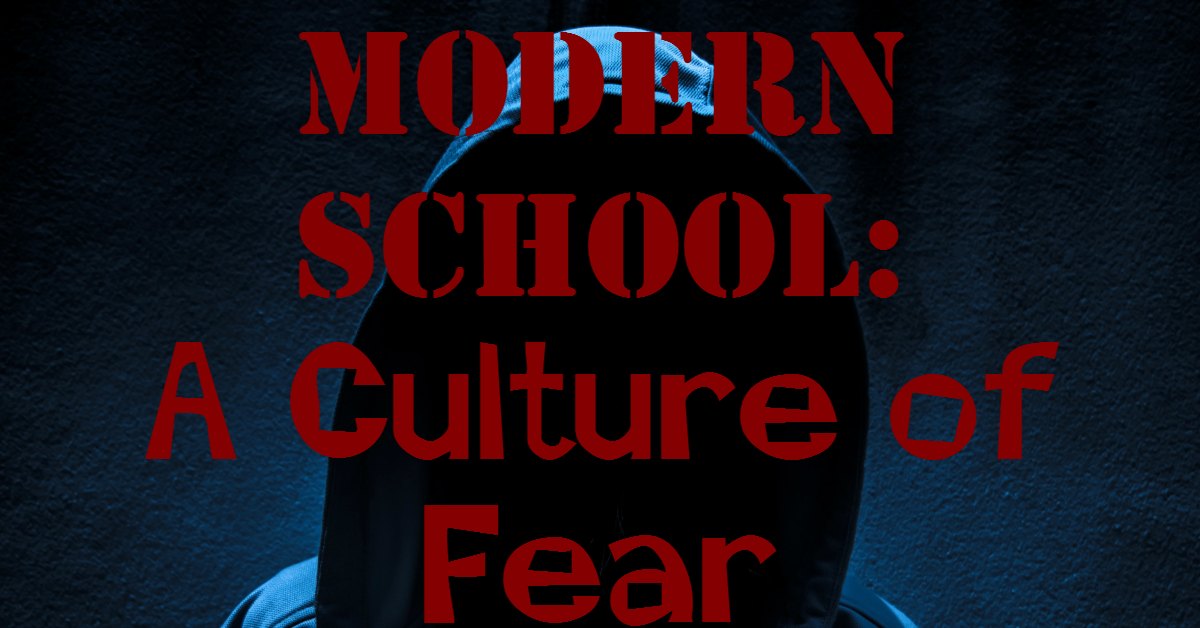 Modern School: A Culture of Fear

My kids love their schools, but it doesn’t take long to figure out that the zero tolerance policies modern schools have been forced into a position where they have a culture of fear for the students, teachers, and administrators. There really aren’t a lot of areas where zero tolerance makes sense and those where it does are already covered by criminal law (assault, abuse, etc.). This is particularly true for kids who may genuinely not know or understand the rules.

How does this creat a culture of fear? When we say “no weapons or weapon look-alikes” on school property but don’t define a “weapon,” kids are left uncertain of what they can bring in. Will their souvenir pencil sharpener shaped like a cannon earn them a trip to the principal? Will a keychain with a bullet casing (not actual fire-capable ammunition) on it result in suspension? What happens if they have a screwdriver or other tool in their backpack, or under the seat of their vehicle for older kids? One boy I know was suspended because he found a (very clean) spent bullet casing in his pocket jeans after a hunting trip. It never even occurred to him, or his parents, to check the pockets of his pants after they came out of the washer/dryer. His family relied on that meat to eat, and now he was suspended because he helped feed his family.

When the dress code targets “sexually provocative” clothing, that leaves girls (and it is always girls) vulnerable to missing hours or even full days of class because someone else has an issue with an outfit they thought was fine, and they might even have worn before. Kids can also be forced to miss class because someone doesn’t like the image on their t-shirt, including images like the American flag that most of us assume are acceptable. No one is saying no dress code at all; simply that common sense and clarity are important.

A zero-tolerance policy on “leggings” might cause a girl to be sent home if she wore them under a longer skirt on a cold day to stay warm. And no, that really isn’t a paranoid or extreme interpretation. Ask any middle or high school girl if she thinks a school might actually do that. Ask her what might happen if she grabs the wrong bra when she gets dressed at 6 am and the straps show at the neckline of her shirt. Ask her if she ever worries that she’ll get in trouble at school over something she is wearing, and what those outfits might be. Ask a teenage boy what kinds of clothing might get him in trouble, including t-shirts.

Can you imagine an adult putting up with that kind of environment at work? Imagine how you would feel if you might lose a day of work, and pay, for choosing the wrong shirt in the morning.

A Culture of Fear

That’s what today’s school kids live in. I showed my elementary son the “clock” in a metal suitcase that a Texas middle schooler brought to school in 2015. (This link has the best picture of the actual “clock” I could find.) I simply asked my son if he would bring that into school. His panicked look at the mere suggestion of taking something that looked like that into school (what it might be didn’t even enter the equation) was the sort of reaction I would expect to see if you told someone to pick up the murder weapon at a crime scene and get their fingerprints all over it. He clearly knew that taking something like that to school would lead to Very Bad Things.

Our kids live in a culture of fear in our public schools – and so do their teachers and administrators. Most of them aren’t afraid, not really, of some wild gunman coming in and randomly killing them. What they are really afraid of is that they will do something innocent, like eating a Poptart or sharing some watermelon with a classmate or wearing a slightly-too-small shirt, and someone else will decide it is threatening or racist or “sexually provocative” and they will be suspended or expelled.

Our teachers are in fear because if they see something that even might be dangerous or later causes offense and they don’t report it, they could lose their job, as could the administrators if they don’t punish the “perp” (once known as a kid, or possibly a troublemaker). Teachers are in fear because they can do things to help a child and end up in trouble for it, possibly even lose their job.

How is this education?

Seriously, what are we teaching our children? This doesn’t teach tolerance and it doesn’t teach inclusion. It teaches them that being around people who are not like them can lead to a whole lot of trouble because there might be misunderstandings if people are different from you. Zero tolerance teaches that if you are with people who are different from you and they do something you even think might be ill-intentioned, it is OK (even good) to demand they be punished without even trying to determine if they understand your concerns, much less actively sought to offend.

We are also teaching our children that they cannot defend themselves. If even the words to describe weapons and any words that might offend are forbidden, then how can they ever learn to defend themselves? The truth is, they can’t – not at school and not in a lot of other places. If they do defend themselves or others, they can easily end up in at least as much trouble as the person trying to harm them. A good kid who defends someone defenseless can end up suspended, missing their own graduation, and more. How is that fair? How is that right?

What on earth are we teaching our kids?

How can we stop the insanity?

This is the real question. It needs to stop, and we have to do it. We have to accept that sometimes, people say stupid things and there is no ill intent. Sometimes, yes, they mean what you think (or fear) they mean – but not most of the time. Even when they do, the issue may be their personal stress and bad day and simply talking will lead to a genuine apology. Sometimes they are tired and simply cannot think through all the meanings of their words. Sometimes they misspeak. Sometimes they genuinely don’t know. And sometimes, other people are just being too darn sensitive.

Zero tolerance is insane. It is strangling our country. It is damaging our educational system, kids, teachers, and even administrators. Zero tolerance must end.

That is a bit of hyperbole, but the truth is that I see more harm than good from zero tolerance. We need to be safe, but school officials need to be able to make the call based on their own knowledge of the person and circumstances. They need to be able to look at the Eagle Scout who has never been in trouble, whose dad is a firefighter, and say that yes, the fire ax in the truck was clearly not intended for any nefarious purpose; as long as it stays home next time, there are no further consequences. They need to be able to look at the kid whose record was spotless but who has been in three fights in two weeks and recognize something is happening in his life right now and they need to help that kid, right now. And helping doesn’t mean suspension or expulsion. Possibly most importantly, kids need to know that if they realize they made a mistake and go to a teacher or administrator right away,

Possibly most importantly, kids need to know that if they realize they made a mistake and go to a teacher or administrator right away, they won’t be punished for it. There is no excuse for treating a student who report a mistake and hand in the “contraband” for teachers to hold until an adult can retrieve it the same as one who is clearly hiding items they aren’t supposed to have.

When we take that right and ability away from the people who are there, who know all the details and specifics, then we start to cripple our society with insane rules and consequences.

We must end the proliferation of zero-tolerance policies.