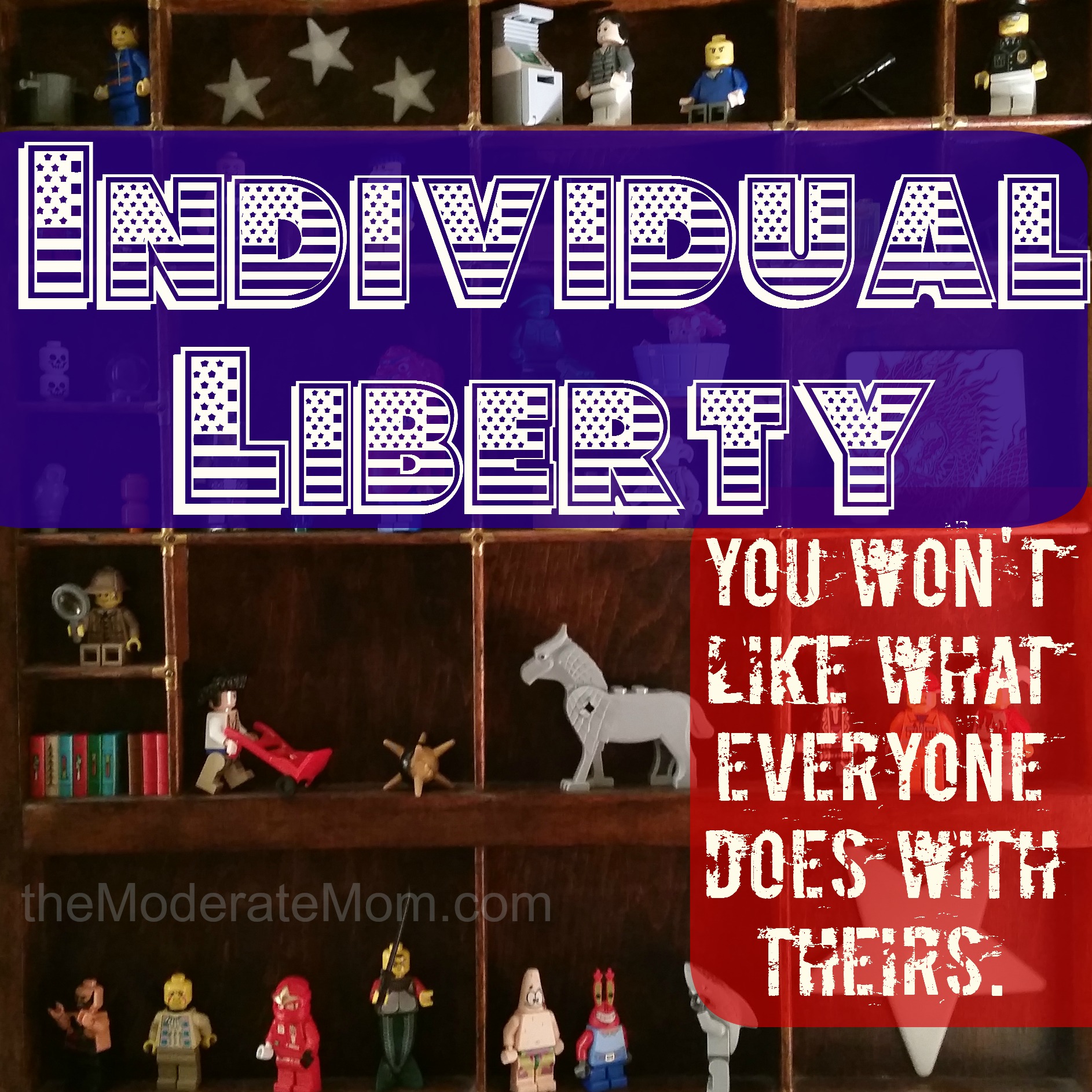 Individual liberty. You won’t like what everyone else does with theirs. Get over it. Devon Austin Generally (FB post)

My kids have shared a room for nine years. The younger one just decided he wanted his own room. Given the level of bickering they had been doing, I made it happen that same day. (Luckily, he decided in the morning, not at bedtime.) We had always planned for them to have their own rooms, they just weren’t ready for them before, so this was doable.

What does this have to do with liberty?

The younger one got a bigger room. His brother asked why. Because you refused it – many times! (Your choice. Get over it.)

The younger one wanted his bed in the middle of the room, like a floating island. My husband thought it was weird. (His bed in his room. Get over it.)

There is a closet in their old shared room. I wanted to put the doors back on it (long story). My son wants a curtain there instead. (His room, his choice. I got over it.)

What these all have in common is that no one else is impacted, much less hurt, by the choices. These are all choices my kids can make safely.

If my youngest hates having his bed as an island, we can move it. If my eldest wants the doors on his closet, they’re still in the basement. The only impact on anyone else is that that their loving parents have to do some more furniture moving.

Kids get told what to do all the time. Until they are given the chance to make choices, to exercise their own freedoms and liberty in small ways, they will never learn to use it responsibly. How can anyone possibly expect a child who isn’t even allowed to make simple choices like the color of their sheets, if they want a side dish for lunch, or placing furniture in their room to grow up and make important choices like negotiating for a job or voting for President responsibly?

My youngest can have a CD player in his room, as long as he doesn’t disturb the rest of us with his musical selections. (Anyone who has heard Let it Go 500,000 times knows where this is coming from.) If he doesn’t like that rule he can…. That’s right: Get over it.

Individual freedom, like most freedoms, isn’t absolute. It doesn’t mean you can harm another or make their lives miserable. It’s OK to have a party and not invite the whole class (they aren’t really all your friends), but it’s not OK to only not invite one kid. Not even if you know (s)he can’t come, because that’s just mean.

Individual liberty is about taking responsibility for yourself and making your own choices – hopefully good ones. It’s not a license to be a jerk, but some people will treat it that way, given the chance and no one to guide them from doing so.

But they’re too little!

When my son was six months old, he could make choices about what he wanted. I remember showing him one red and one blue plastic chair at the store and asking which he liked. I asked two or three times, switching hands to make sure it wasn’t just based on which hand was holding what, and his answer remained the same. (My six month old, on the other hand, started getting annoyed since he had clearly told me and didn’t want to keep answering the same question.)

If a six month old can handle decision making, your kid can handle it. OF COURSE it has to be age appropriate! When you go through and clean their room, let them help decide where to store toys. That will also help them remember where to put them back. If it doesn’t make sense to you, so what? What matters is that it makes sense to the person putting away the toys. If it makes sense to your little one, then it’s easier for them to take over that job, which should be theirs anyway.

Let them help you decide on their chores. I have one who hates – *hates* – putting away dishes from the dishwasher. He can’t explain it and I certainly don’t get it, but he’d rather clean the cats’ litter box. After fighting him on it for awhile, it became his younger brother’s chore and he cleans out the cat box. Life is much more peaceful as a result.

One son loves running the vacuum and cleaning the gutter. The other prefers gardening, including weeding and planting. Letting them choose their own chores has ended up with them doing things I never would have expected (gutter cleaning? really?) that really are a help. Since they are things the boys don’t mind and they were involved in choosing, it’s easier (not easy, just easier) to get them to do their chores, with less whining and wandering off while they do them.

As they get bigger, so do the choices they can make and the consequences. Part of a parent’s job is, of course, to help guide our kids in all their choices as they grow, no matter what the size. When my son was looking for new sheets, I made sure he felt the sheets to see if they were soft enough and didn’t just choose a pretty pattern. I know a scratchy set of percale sheets would have made him an unhappy camper in short order, but he didn’t know to look for that since he’s only had nice, soft sheets.

My older son really has his heart set on studying two specific languages. Naturally, neither is offered at his base high school, but both are offered at one he hopes to transfer to. Knowing this isn’t a whim, I found online courses the state recognizes that he can take the regular middle school classes. This way, he has a head start on one of his preferred languages if he gets in, and if he doesn’t, he can continue taking online language courses even at his base high school.

Because he was born an engineer (as some are born artists or musicians), the languages he wants are ones that can help him in his future work. This is not an idle choice, nor is it insignificant for his future, even though he is still in middle school.

There are those who think I am being a “helicopter” and pushing my son by helping him study the language he wants. My choice, as an adult, to help my son achieve his goals makes these other adults unhappy. I don’t care. My son is free to choose a path less taken, and I am free to support him in it.

In fifth grade, my son was bored. He hated school and just rushed through to finish things quickly, including standardized tests. In sixth grade, they start tracking kids into, basically, college-prep and not-college-prep. For math, a select few compress 6th through 8th grade math and take them all in 6th grade. They start taking high school algebra in 7th grade.

My son wanted in this class. His scores weren’t quite good enough (he was on the border) and he didn’t get placed there. I contacted the school and very nicely explained the situation. Given how close he was overall, they ended up letting him in. He is now on track to enter the hyper-competitive science and technology (STEM) high school he wants to go to.

Going to that high school will give him contacts and experiences that will help him for the rest of his life. Among other things, it will hone his presentation-giving skills, which are currently…. Let’s just say they aren’t his strongest skill-set.

One of his friends was offered admission to this same class but declined it because he didn’t wanna. He also wants to go the same STEM school but it is extremely unlikely that he will get in because, as a fifth grader, he chose to skip the hard math class.

This isn’t the only time I have seen another parent’s choice and wondered about it. But in the end, I don’t know their child, their home, and their situation in general enough to make any judgments. It’s really hard not to judge, but it’s important to keep in mind that just because we don’t agree with them doesn’t mean they are wrong.

Returning to the main point…

Let your kids make choices. Encourage them. Heck, FORCE them to make choices! But be there to guide them. Help them learn what matters most to them, including sports, hobbies and volunteering, so their decisions reflect that.

Personally, I have been a Scout since I was six and will be until the day I die (lifetime membership). I make, remake, and make again choices to support Scouting. I know others who do the same with music, church, community, sports, alma matters, and any number of other organizations. I have been making the choice to be active in and support Scouting for as long as I can remember.

Think about your own childhood and teen years. There were almost certainly things you loved that you still love. Why would your kids be any different? Help them find their own passions and follow them, no matter what anyone else thinks – as long as it doesn’t hurt anyone else or break the law, of course.

Make sure that as they grow, they learn to use their individual liberty to make the best choices for themselves and their loved ones. Not for their friends, neighbors, or passing judgmental acquaintances – for themselves.