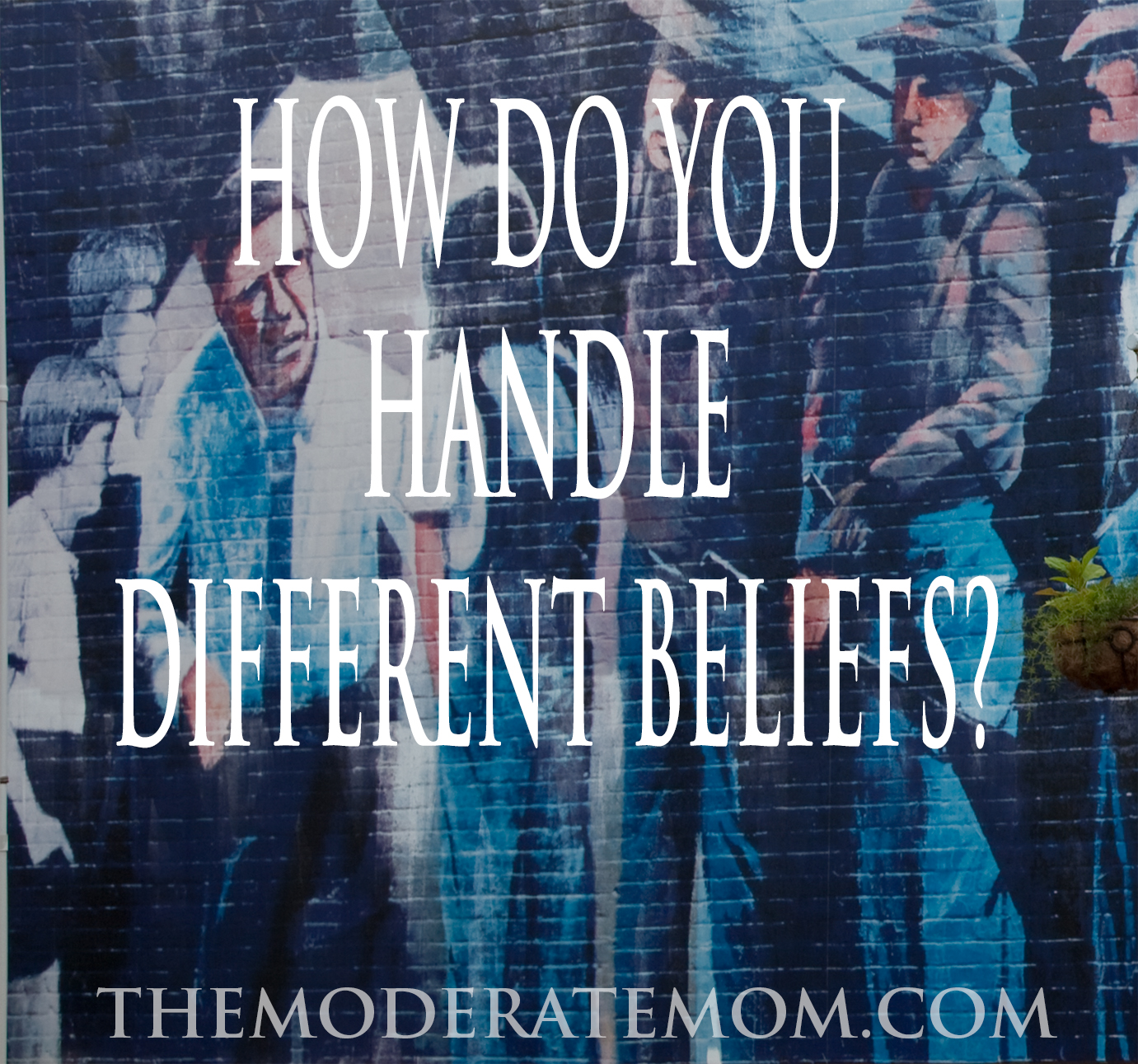 How Do You Handle Different Beliefs?

“Never discuss politics and religion” is reasonable advice for day to day harmony, because the topics bring out such strong feelings, but it has led to some unpleasant long-term side effects. People truly do not understand how people can have different belief than they do because people do not discuss their beliefs with anyone whose beliefs differ from theirs in any meaningful way.

Part of the end result of that reluctance to discuss our beliefs is that people end up with less understanding and tolerance of other beliefs. It isn’t because they are bad people. They truly don’t understand how any intelligent, humane person could believe differently from them.

Some are tolerant of other viewpoints and even search them out to understand them better, but the reality is that most people range from indifferent to the opinions of others to actively avoiding them. Recognizing and respecting those differences goes a long way toward more harmonious interactions.

We all need to work on managing expectations of ourselves and others online and in person, myself included. Everyone has subjects they feel strongly about, usually based on personal experiences but sometimes based on something else, like newspaper articles, and what they hear and see from others in their own community.

I believe firmly that it is important for citizens to own firearms for personal protection. (I may post why some day, but this post is not a discussion of that.) I have other friends who believe the opposite, at least as firmly. Not all are willing to discuss hot-button issues like this (most avoid them), but I have had FaceBook discussions with several who disagree.

I really appreciate the few who comment back when I make testy comments. Sometimes when they have called me out, I have backed down because I realized what I was saying, liking, sharing, or reposting was either flat out wrong or too strongly worded. But other times, I have argued back and they have learned from my arguments, just like I learn from some I disagree with. (I know this to be true simply because they have said so.)

Some of my friends and former classmates will discuss the issue for a while, but it’s clear that neither of us is presenting facts or opinions that will sway the other. In some cases, we have agreed to not discuss or post on it any more because it’s clearly just a waste of everyone’s time. I’m OK with that, because there was no attempt to shut down communication, even in the face of high levels of frustration on both sides. I know I can post, should I want to, without being unfriended.

It would be foolish to treat these groups the same, and I need to manage my own expectations of how I should talk to them and how I can expect them to respond. I continue to discuss the matter with those who are open to it. For the others, I don’t bring it up.

Some people simply have no tolerance for view points that counteract their own. I don’t know why. Some are so arrogant they can’t conceive of being totally in the wrong. Others are be blinded by a faith that says anyone who disagrees with what their Pastor is preaching is wrong (itself, another form of arrogance). Some are too lazy to look at the evidence. Still others may simply be too stupid to comprehend the arguments against their case.

I respect those who are willing to talk despite having extremely divergent opinions. A high school classmate and I have radically different opinions, and conversations have definitely gotten testy, but I have never felt like he viewed me as being intellectually inferior to him. A college classmate also has some very different opinions but is genuinely interested in learning another point of view and has regularly been chatting and exchanging views with me.

Because of their tolerance for the existence of other opinions and apparent ability to see that other people can look at the same information and come to opposite conclusions, I have the utmost respect for both of them.

At the other extreme, another friend stated that they want to stop certain conversations entirely. Anytime anyone refuses to even have a discussion, particularly with an underlying attitude that those who disagree with their position are somehow intellectually inferior to them, they immediately lose my respect, no matter what other accomplishments they have.

For those few who aren’t even willing to talk, I try not to discuss much of anything but it’s hard. I recently asked for the facts to back up a statement someone else made. I read it as “gun ownership correlates highly with murder rates”, but it was actually that it correlates with “increased deaths by shooting.” The response was a link to some Google search results.

Well, clearly someone can’t be shot without a gun! But what about the overall violent crime rates – particularly murder and suicide? By focusing on such an insanely narrow point, the conversation has been halted another way. Truthfully, I misread it because I just didn’t expect such an incredibly poor argument, and I really didn’t expect the total lack of anything to back it up.

Personally, I prefer to use things like studies from top-tier universities and surveys of professionals working in a related field as evidence to back up my positions, but if a Google search result is the best you can do….

Seriously, if a Google search is the best you’ve got to back up your entrenched position, it’s a waste of my time to try to change it.

Whatever the reason, in the end refusing to even listen to another viewpoint is nothing more than intellectual laziness and arrogance. I think the biggest irony is that most of those who refuse to discuss issues genuinely believe themselves to be more tolerant than the average person!

In the end, the only tool I have found that makes any headway in altering what others think on hot-button topics is the hardest of all to wield: frank, calm discussion. Don’t get angry. Don’t call names or storm off in a huff. Allow for the possibility that what you hold to be true might not be 100% true.

But don’t let anyone walk all over you and convince you that you are wrong without some solid evidence on their side, and as amazing as Wikipedia really is, it’s just one of many websites that is most definitely not solid evidence. When you do realize you were wrong – and if you are honest and open to discussion, there will be time – admit it. It’s amazing what a difference that can make.

I think we all recognize that our nation has a lot of healing that needs to happen. In the end, one of the best steps we can take to make that happen is to stop being afraid to talk to people who are different from us in their beliefs, backgrounds, politics, race, or anything else. Have real conversations with them. Discuss hard issues, then we’ll start to understand and can move forward.

Until we really, truly start to talk about tough issues, that will not happen.