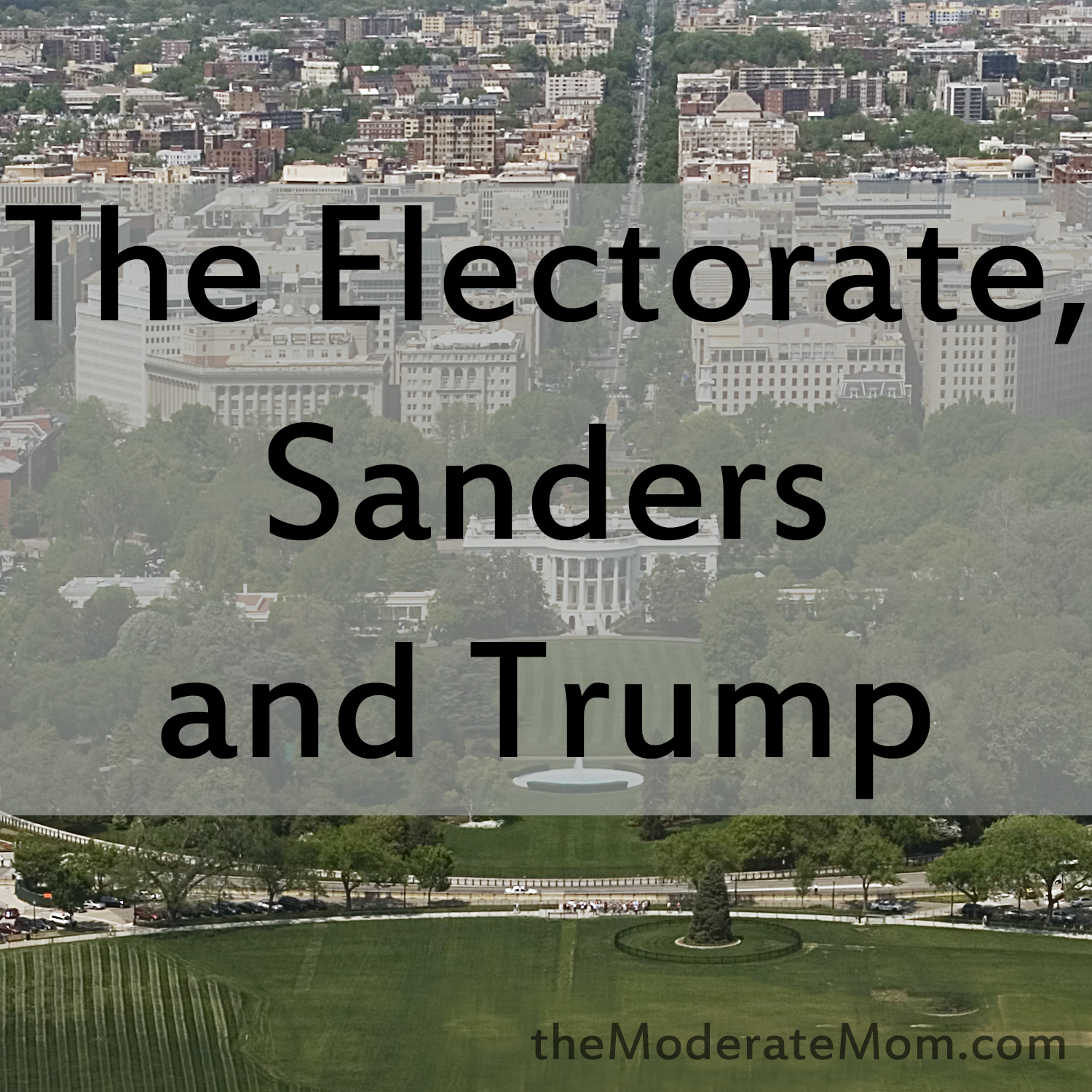 The Electorate, Sanders and Trump

And yet, Sanders and Trump are still in it. The establishment candidates are having to respond to them because the citizens are responding to them in such large numbers, even though they are far from moderate.

There’s no way to now, but my opinion is the simple fact that these men are not politicians and are not acting like politicians  is really drawing citizens to them. Everyone I know is sick to death of politicians who change “their” opinions based on every new poll that comes out and are afraid to speak the plain truth as they see it. Goodness gracious – that might alienate a few voters!

Do I want to see Trump as President? Not particularly, but I would prefer him to Jeb and several other Republican candidates. I will be over the moon with joy if his candidacy pushes Jeb Bush out of the running. Nothing against Jeb personally, but I am sick of career politicians. We keep electing them and expecting different results – the definition of insanity.

Do I want to see Sanders as President? Again, no, not particularly, but I prefer him to Hillary. I will be ecstatic if his running pushes her out or at least gets other candidates to run. My beefs with Hillary as a Presidential candidate are that she’s too old and, like Jeb, she’s part of The Establishment.

“This campaign is not about Bernie Sanders. It’s about a grassroots movement of Americans standing up and saying: ‘Enough is enough. This country and our government belong to all of us, not just a handful of billionaires.’ “

The above is taken directly from his website. While the statement by itself is hardly unusual, the fact that he is willing to state his positions fairly clearly and with no concern for what any polls say is unusual. And “unusual” in this case is definitely a good thing. I don’t know anyone from far right to far left who isn’t sick of politics as usual. At this point, I think anyone who has the brass to actually state what they believe and stick to it will be well received by large numbers of people – at least for a while.

Right now, Sanders’ surge is fueled by highly liberal, white voters. He is very popular among them, but no so much among the larger Democratic voting base. Also, the news media is very happy to cover news that increases interest in the election such as news that makes it look like a front-runner has some serious competition.

Given Hillary’s continuing high favorability ratings among Democrats as a whole, support for Sanders seems unlikely to translate into a nomination, much less an election, for him. But it does show that there is a large base of people who do not believe the national party is representing them.

Trump is playing the media like a maestro. He is grabbing the headlines and hanging on like a rodeo rider going for a record ride. He says inflammatory things that others may be thinking, but puts them in a way that no one else would. I have no doubt.

Are murderers and rapists coming over the border from Mexico? No one can really deny they are, but it wasn’t being talked about it before Trumps comments. Those comments were put in his bull-in-a-china-shop style that made it possible to interpret to mean that all Mexicans coming over the border are murderers and rapists, except maybe a small number.

His style has led to massive coverage, massive leaps in popularity to the top of the polls – and a massive leap in the number of people who truly, deeply hate him. Neutral is not a feeling he engenders.

When it comes time to vote, these men are both getting surprising levels of support. But really, I think support for them is more about frustration with The Establishment and their candidates, and with the way all our politicians have been ignoring serious issues for decades while they simply get worse and worse.

Bills are coming due for that negligence and issues really need to be addressed. The people are figuring that out. Now we just need to get the message through to the media, our candidates, and our elected officials. If it takes supporting Trump and Sanders for a while, that’s a small price to pay indeed.

Previous Post
The Butchering of a Frederick Douglass Speech
Next Post
How Do You Handle Different Beliefs?