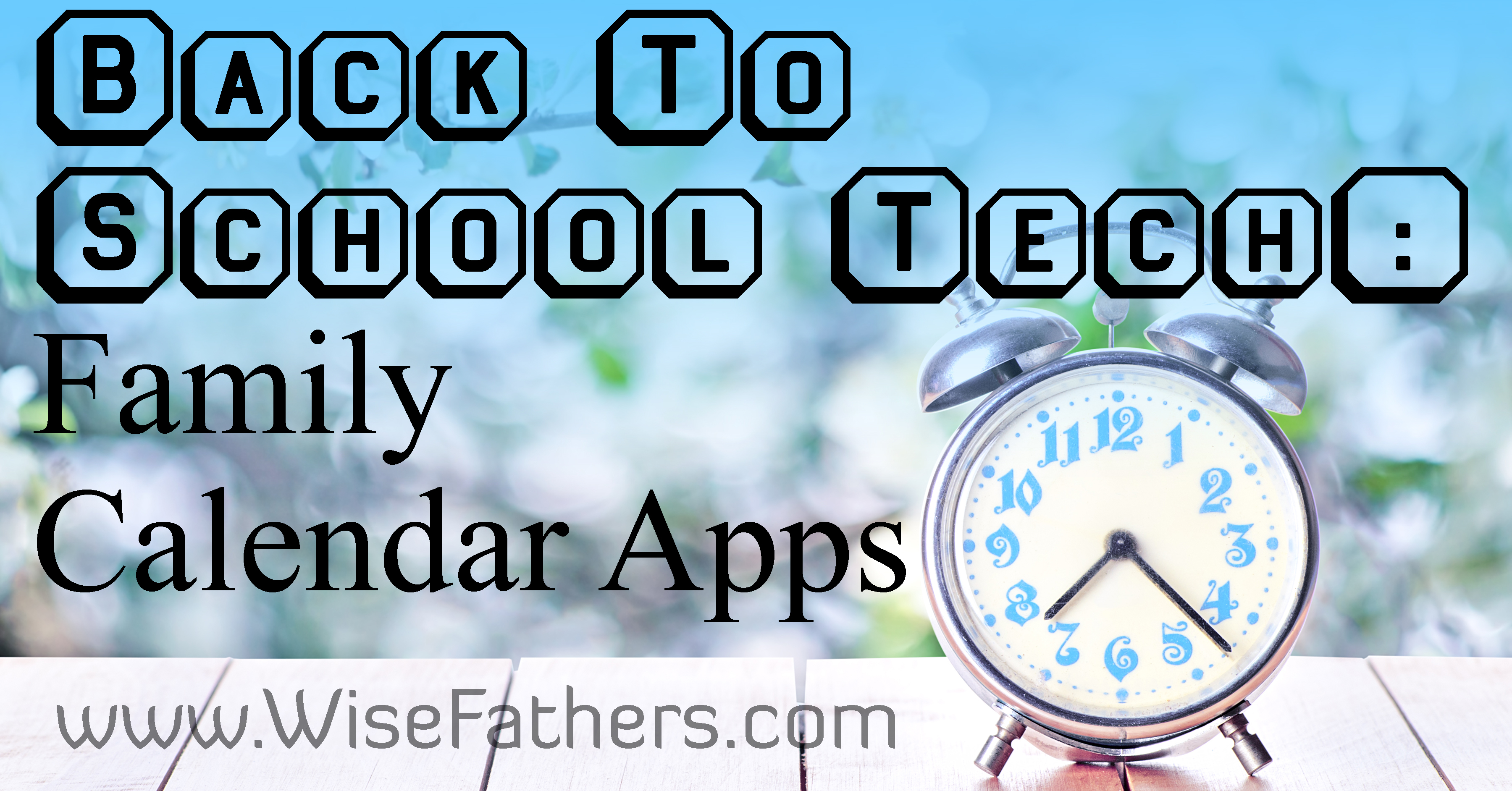 I don’t hold with conspiracy theories that Google, Apple, Amazon or anyone else care what individuals are doing, but I am tired of feeling like I am supporting a few giant companies that keep swallowing up small businesses and getting bigger. I know I’m not alone in this but finding other choices can seem like too much work or too expensive. With a new school year approaching and summer camp finished, it’s a good time to switch calendar apps.

Google Calendar is soooo easy. It is. Everyone uses it. It connects to everything. It’s everywhere. It’s easy to network a seemingly infinite number of people, even letting grandparents have access to see what you are doing. But when is the last time the grandparents actually looked instead of calling or emailing you to ask when someone is free? In our family, that would be never. For that matter, getting our high schooler to look is nearly impossible and he really needs to.

I started my search the same place anyone else would: Google. I found an article The 10 Best Family Calendars for 2017. The first two are the Apple and Google calendars. Since I am trying to get away from big companies, those are out of the running. If Hub has an online or desktop version (in addition to the app), I can’t find it, so that’s out for me. If you are OK with app-only, it might be worth a look. The last four are physical calendars. That narrows it down to three apps to consider, which is something I can handle. (Ten was seeming a bit overwhelming.)

While Outlook wasn’t mentioned, I didn’t consider it because it is a Microsoft product and that’s another giant company, obviously. Also, Outlook isn’t an app. It isn’t easy for kids to use.

Since this is a long post, I will start with my short conclusions: Family Wall is great if you have teens or family members who love posting and sharing photos and more. Cozi is my recommendation if you have younger kids.

I am using an Android phone and Kindle Fire tablet to test these apps. (I know not many people use the Fire tablet but I like downloading movies.) I wanted to test the apps on my Microsoft laptop as well, but it won’t download them so I am simply using the online versions on the laptop.

Most of these ask you to email or text other people to get started, but Cozi and Famjama don’t. Viewed on my phone, the apps pulled up my contact list. I don’t want to email or text my kids to add them. *I* need to know when school holidays and Cub Scouts are precisely because they are oblivious to scheduling and resistant to checking email.

Unlike Cozi and Family Wall, Famjama is strictly Internet-based and doesn’t have an app. That means you need to log on to the internet to see your calendar on any device, a clear drawback. Cozi is even available for my Kindle Fire.

This may not seem like a benefit to you, but it is. If it’s ten o’clock at night or five am and you finish the last of your favorite snack or the coffee, it’s good to be able to grab your phone and add it to the shopping list before you forget. I don’t know about you, but I wouldn’t want to face the wrath of anyone who is coffee-less because I forgot to add it to the shopping list. I also like the convenience of adding items to the list after my spouse goes to the grocery store, especially when I am curled up on the sofa feeling sick.

Really, I think we can all use online lists because it’s too darn hard to remember what, exactly, we are supposed to be doing.  Both Cozi and Famjama include shopping and to-do lists. Family Wall doesn’t have shopping lists, but it does include a message feature.

I don’t see this as a big feature for a family calendar unless it’s an extended family, but Famjama supports it, and so does Family Wall to a lesser degree. If you have a big family or coordinate a lot of group calendars, maybe this will appeal to you.

My first reaction after initially downloading and logging in was that Cozi might be the answer I’m looking for, primarily because I can use the larger, more full-featured version online when I’m logged in but still have the basic information available on my phone even when I’m offline. (Schools never seem to have connectivity; I think it’s the concrete walls, but that’s just a theory.)

First impressions aside, the more I look around Cozi, the better I like it. They send weekly agendas to every family member with an email entered and that option selected. Brilliant! Now “but no one told me” isn’t a viable defense! The kids still won’t have a clue since they don’t check email, but at least they don’t have a good defense.

I also like being able to put recipes in the app. I hate menu planning, but this makes it easier to have a meal plan for the week, get the groceries (especially since it includes a shopping list feature), task the kids with cooking (when they can handle it), and even “work late” and miss dinner on days I really hate what’s on the menu.

The premium (“gold”) version is $30 per year for the whole family. While I love free apps as much as anyone else, I am OK with paying a reasonable amount to support products I use regularly. Since the cost here is similar to buying one paper planner for the year, I think it’s reasonable.

Unlike Family Wall, the free version of Cozi has ads and you have to upgrade to go ad-free. A lot of the upgrades amount to nice-to-have features, but they are nice to have and part of the reason I am making the effort to switch from one of the big calendar apps is to support a relatively small business. The two that really stand out are being able to search in the calendar and having a shared contact list. We are not the only family with kids who cannot remember addresses and phone numbers for grandparents, family friends, and every other place on earth. (Some kids, may, however, be able to give exact locations for every place mentioned in Star Wars/Star Trek/their favorite franchise.)

Cozi can import events from Google Calendar and can also synch with it.

As I said, this looks like a good choice for families with teens. Unlike the other two apps, Family Wall doesn’t include shopping lists but does include internal messaging. I think it’s meant to be sort of a family chat-room. Honestly, I don’t see the reason for it, but I can be tech-resistant. We already have messenger apps we use.

Family Wall is a little different from most calendar apps because it is designed to almost blend a virtual scrapbook with your calendar. You may not be the picture-taking-and-posting parent or a big social media user. If you aren’t, the ability to include a photo gallery with your calendar may seem silly. If you are that parent, it may seem brilliant. And that is what makes it brilliant: If one person does most of the picture-taking, the others don’t see most of those photos, no matter how good the intentions. Most of us won’t put a ton of our family snaps on any social media because of privacy concerns, but those aren’t such an issue with this app, or with teens. That makes it easy to share within the family.

Teens are infamous for not sharing, but the ability to ask a question or post a quick pic on the calendar may just be enough to encourage them. Granted, a lot of those may be things they want you to buy them, but at least it’s communication and you won’t have to guess for gifts.

Family Wall requires an account for each person, which means they need to be emailed or texted for set-up. I don’t like that, but my kids don’t use email much yet. It also includes a “map” feature that allows you to track where each person is, if they have “location sharing” turned on and their battery isn’t dead. I can see that feature being handy at times, but it is available other places so it isn’t decisive for me.

Combined with “circles,” the ability to connect to sync with other calendars, including all the major ones, is a nice feature. When you create a new circle, you can include or exclude members of other circles. That means you can pick and choose who sees what calendar.

The premium version costs $4.99 per circle per month. That’s nearly $60 per year for your family, more if you add more circles. That isn’t outrageous, but it isn’t particularly cheap, either. Going from 100 MB to 10 GB is a huge benefit. I also like the ability to find family members’ locations in real-time (shown on a map) and for them to send SOS messages. I definitely can see the benefit to those if you have teens at home.

When I signed into Famjama for the first time, the first screen it showed me was to add additional family members. That was before I even went to the calendar, making it very easy to be sure I didn’t forget to add the whole family. They have an option to email each person but don’t require it. Since my kids never even log in to their calendars, I appreciated not having to enter emails for them.

You can use shared shopping lists. The built-in categories include grocery & pharmacy, clothes, home & garden, sports & toys, and other. In addition, there is a wish list for gifts and a “private wish list” so each person can save their own list of things they want. Unfortunately, they don’t have an app. You can see it using an internet connection, but the lack of an app was a deal-breaker for our family. In addition, there isn’t a secure site (https). While there are some great features, this just wasn’t the solution for us.

There is no premium version. It is simply a free app. They integrated a coupon site with their shopping list, which may be how they make money.

After spending way too much time going betwixt and between the different online family calendars, the clear choice for our family is Cozi. It has features that we can all use, it doesn’t require email addresses for the kids, the annual premium cost is reasonable, it works with Google Calendar, and it even lets us do meal planning. The fact that we can use it on the Kindle Fire is just icing on the cake.