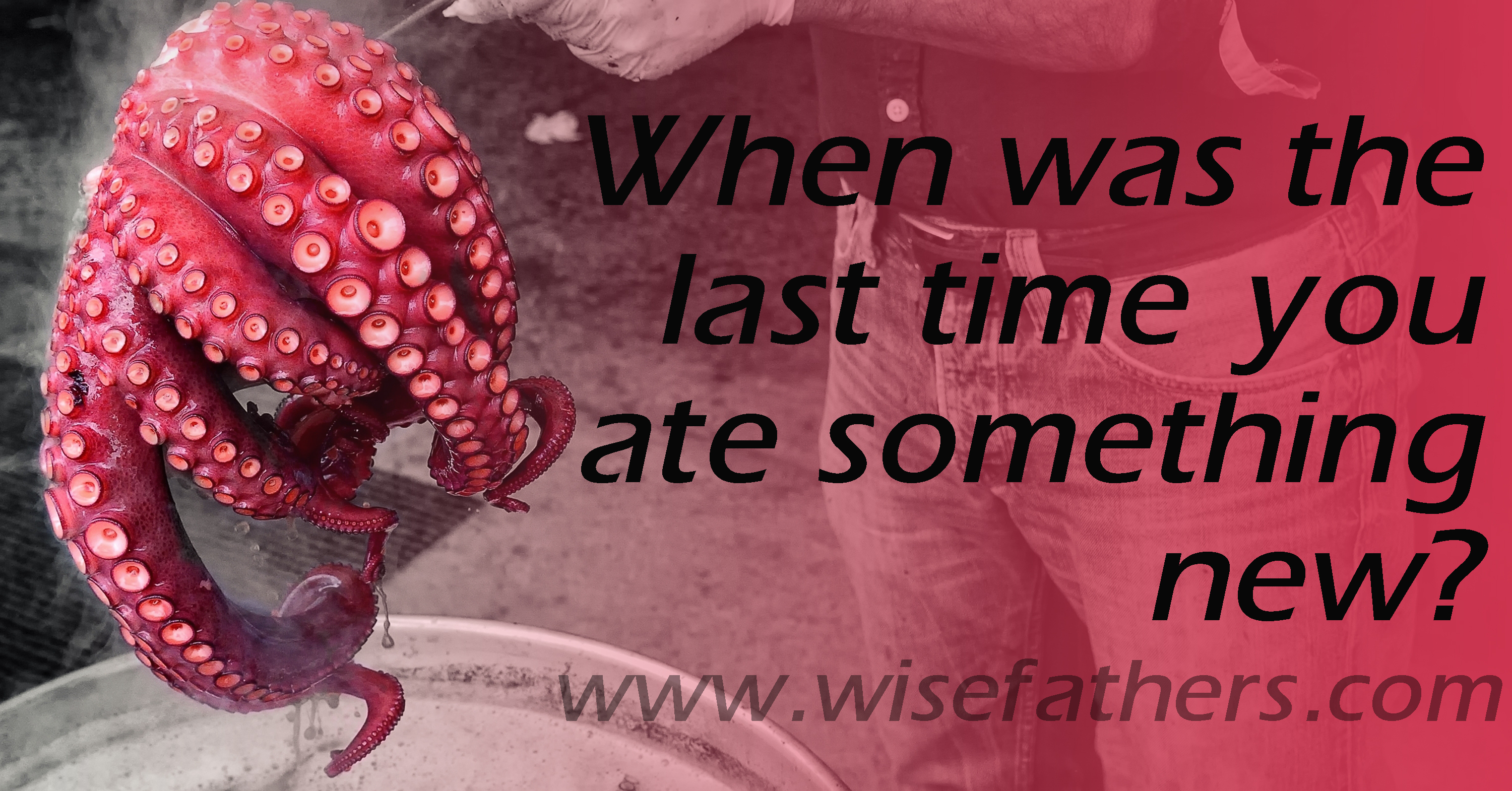 When was the last time you ate something new?

Kids aren’t the most experimental eaters, generally speaking. Sure, if it’s sugar-coated they’ll go for it, but they tend to stick to their favorites and it’s hard to get them to experiment. But when was the last time you tried something really different? I make a point of eating different foods just to push myself, and so my kids can’t complain that I’m asking them to do something I won’t do.

When I visited New Orleans, I ate alligator andouille and, I believe, turtle. (It wasn’t a recent trip.) On another vacation, I had frog legs and escargot. I know I’ve had crawfish, which aren’t exactly common where I live, and I have been checking my yard for wild violets because they are edible, like dandelions and many other weeds. So, while I suck at eating fruits and veggies, I do genuinely try to eat new foods on a regular basis.

Most of us want to make at least some real changes in our family diet. If we’re honest, most families have at least some room for improvement to have a truly healthy diet. It’s easy to slip into the same bad old habits, no matter what our age, which makes change hard. I would even go so far as to say most kids’ entire diet is habit based. But hard isn’t impossible. When I decided to improve my own diet, I started by limiting my daily soda intake and reducing how often I eat pizza. Once I was comfortable with that, I switched from very sugary snacks to less sugary snacks, and eventually to reasonably healthy snacks. Taking that sort of small-steps approach will almost certainly lead to better results for your kids and for you.

Ask yourself these questions:

The BBC created a list of “50 Foods to Eat Before You Die.” Can you see a reason to eat haggis? (Being able to say “I’ve eaten haggis” doesn’t count.) If so, please share in the comments because I sure can’t. That’s way too adventurous for me. While I thought it was kind of fun to try escargot and frog legs, I see no reason to torture the family by having them for Sunday dinner. The kids would be justified in bringing that up in a therapy session some day.

My goal is to have the family eat more healthy grains, veggies, and fruit. And by “more”, I mean any.

In China, “Chinese” food is just food. In Japan, raw fish in a restaurant (sushi) is expensive but otherwise unremarkable. Hummus is common in Middle Eastern restaurants. When I was a kid, I tried new things more easily at restaurants with “ethnic” foods for the simple reason that most of the meals included something I didn’t know, so it was unavoidable. It’s still true as an adult.

In case the picture at the top made you wonder: Yes, I have tried octopus. It was a bit rubbery, but it was from a street vendor at the Cherry Blossom Festival, so it might be better at a good restaurant. The suckers were clearly visible, which was a bit weird, but it was no stranger tasting than the average scallop. I wouldn’t have tried it if it wasn’t right in front of me at a stall full of Japanese dishes.

Appetizers are another good choice for introducing a new food, especially since they can be shared. Many moons ago, I went out on a bit of a limb and tried spinach artichoke dip at a restaurant. I had never knowingly eaten spinach but it sounded good and it was an appetizer I could share, so I went for it – knowing I still had my main course if I didn’t like it. It was, of course, quite tasty, and now I eat both spinach and artichokes.

Jerry’s Seinfeld’s wife, Jessica, wrote a great cookbook called Deceptively Delicious that was all about sneaking things like cauliflower into food for kids. While I don’t have the energy for that, there are simpler ways to do it. In my example above, I decided I was OK with both spinach and artichokes after trying spinach artichoke dip. You could serve it for your kids without telling them what it actually is. If they like it, then you have opened a door to other foods containing spinach and artichokes.

Hummus is another great way to introduce new foods. I recently saw pineapple-jalapeno hummus in the grocery store. That was when I realized the variety is truly endless. (It was surprisingly good.) Did you know garbanzo beans/chick peas are a main ingredient in hummus? If your little one loves hummus, you have a chance to get them to eat garbanzo beans in other foods and to use the hummus to get them to try other foods, like pine nuts and sundried tomatoes.

Whenever you have a food where a lot of items are mixed together such as a stir-fry, salad, or stuffed dumpling (pierogi, ravioli, gyoza, etc.), you have the chance to add in a new food. Once you know they like it, you can tell them it’s there and try it in other foods.

There is nothing wrong with letting them know if you don’t love a new food. If they see you continuing to eat more than one bite of something you don’t initially like, that’s an incentive for them to copy you and do the same. If you pretend you love every new food (unless you really do, which is amazing), then they will probably think you don’t understand what it’s like to eat something you don’t like, or even hate. There might be some new foods your family tries and all agree should never enter your home again, but you will probably find some new things you love.

So, what are you waiting for? Go try something you’ve never eaten before! Then come back and share what it was and what you thought of it in the comments.