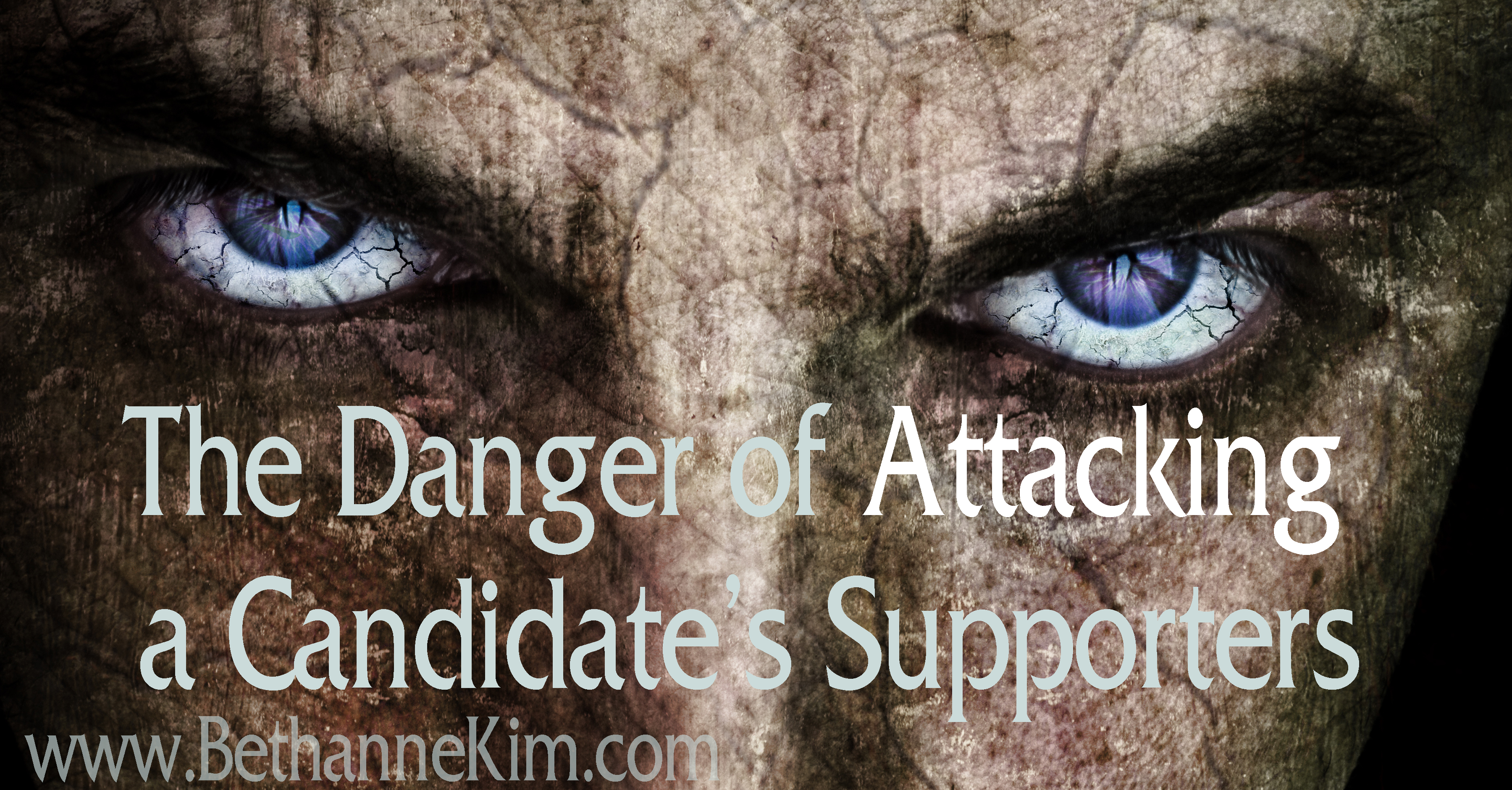 The Danger of Attacking a Candidate’s Supporters

In American Presidential elections, there are two candidates (realistically) in the final race. This election is no different. Politics is a dirty, brutal business, which is why very few good people are willing to enter the fray and even fewer manage to stay the course. Attacking the candidates, their beliefs, their life history, their relations with the opposite sex, and even their family is par for the course. That’s part of the reason they have Secret Service protection from the time their party nominates them until they either lose or die. For some, the vitriol is sufficient that they receive protection even before receiving their party nomination.

At times, their supporters are attacked as well. Some charges are leveled against both sides, most commonly that those we don’t agree with are ignoring obvious facts and can’t/won’t think logically. While those can be unpleasant and nasty, depending on how they are phrased, they aren’t really impugning anyone’s character nor do they make “the other side” (i.e., fellow Americans) into an enemy who must be defeated at all costs.

How This Election is Different

The level of vitriol leveled at the candidates is astounding. Hillary is a lying, cheating, political hack who attacks rape victims, laughs at a tween who was raped, is guilty of dereliction of duty (Benghazi) and has committed espionage by negligence (emails). Oh, and she is covering up massive health issues. The Donald is a lying, misogynistic, racist, homophobic, xenophobic, Islamaphobic jerk who cheats small businesses and sexually assaults women.

I have friends from both sides of the aisle. The conservatives are not accusing liberals or progressives of personally being liars who support rapist and think blacks are “super predators” like Hillary does. Nor has the Donald lumped Hillary’s supporters into one “basket of deplorables” who are “irredeemable” and “not America”.

On the other side, I see posts and comments from liberal friends on a daily basis who call anyone who is voting for Trump a racist, bigot, misogynist, etc. These are attacks on a candidates SUPPORTERS. This is unacceptable and dangerous. The events of October 15 demonstrate this in stark terms.

In Bangor, Maine, twenty vehicles were vandalized at a Trump rally. Unknown vandals spray-painted white lines on the vehicles. The same night, someone threw a molotov cocktail through the window of a North Carolina Republican headquarters office. Luckily no one was injured this time, but just denouncing the NC attack isn’t enough. Hillary needs to stop attacking the character of anyone who opposes her and the Democratic National Committee needs to call out her behavior as unacceptable.

These are not the first, nor are they the last, attacks that are directly against a candidate’s supporters in this election cycle. By denigrating Donald’s supporters, Hillary and her campaign are turning them into the enemy. An enemy is automatically someone it is acceptable to attack. Her words and her treatment of those who don’t support her is leading, directly, to violence against individuals, and to property damage and destruction. (Trump supporters have been attacked for wearing Trump hats and shirts.)

I don’t like Donald Trump. I don’t. But I will be voting for him because there is no evidence (i.e, proof of any sort) of him doing anything worse than being a dick. Frankly, even if there was evidence of him being a rapist or sexual predator, Democrats have no room to criticize with the likes of Bill Clinton, Lyndon Johnson, and JFK in their ranks, but that is a different issue. (Johnson apparently liked to be naked in front of, well, anyone and everyone.)

Other people are voting for Hillary because they see the attacks on her as being on irrelevant points or believe that she is genuinely not guilty. They believe Trump’s personality makes him unfit, and that’s their right. We need two parties with two different, and contrasting, points of view.

No one, in either party, wants America to become nation of misogynistic, racist xenophobes. We don’t, as a nation, want to go back to the days when being a member of the KKK was something anyone celebrated. Sure, a few wing-nuts may, but the opinions of a few wackadoodles doesn’t make their position mainstream or acceptable for either party. Unfortunately, having the media relentlessly parrot that position as commonplace and acceptable by a large group can accomplish that.

The more the main stream media and social media villify any group of Americans, the more that group can become a target. It’s one thing to call those at the far ends of the political spectrum libtards and wingnuts. Ultimately, while highly unflattering, neither name implies the group is a true danger to anyone else. Racist, misogynist, and any kind of “phobic” (homophobic, Islamaphobic, etc.) are labels for groups that want to remove or suppress other groups. Everyone I know is in agreement that we need to weed out these groups.

Until we can agree to stop use those kinds of labels for those who simply disagree with us, the probability is that these kind of incidents will happen more often.

Previous Post
What to Do When Your Kid is Sick
Next Post
Gift Guide: Buying Essential Oils

4 thoughts on “The Danger of Attacking a Candidate’s Supporters”