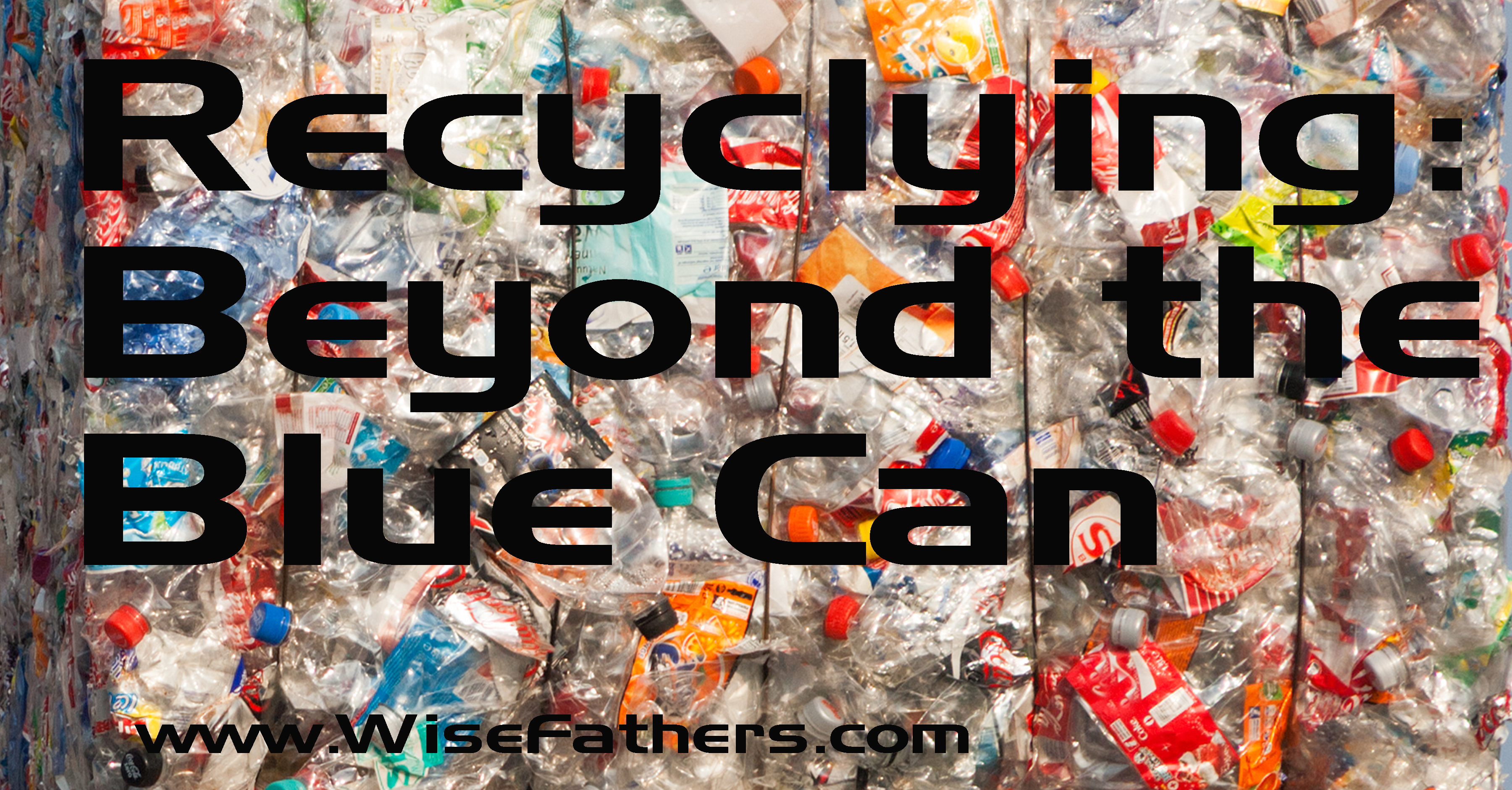 Recycling: Beyond the Blue Can

At this point, everyone should know to put their cans, paper, and bottles in the (normally blue) recycling can instead of throwing it in the trash, but that’s just one part of it. I have always felt strongly about the need to protect the environment, so I’m a bit more aggressive than most people, but there are things you can do to clean out your house, save money, and help the environment.

This does tend to fall to moms, but it doesn’t mean dads aren’t involved too, and of course single dads need to take care of everything. There are a few categories of things to get rid of with kids:

Since we have two boys, a lot of things were boxed up for years between boys. Some of the toys became favorites for the second one, but the truth is that most of them just took up space until we finally donated them to Salvation Army. As for the clothing, almost all of the tops were used for both boys, but one only wears jeans and one never wears jeans so that was a bit of a miss. Nonetheless, we saved a ton of money by boxing everything up and reusing it. I have to admit this would be harder if we had daughters. Girls just care more about fashion.

As things reach the point that they are truly, clearly, undeniably no longer useful, the final decision is a simple one: Do we save it in case they have kids and want that thing? Most of the time, the answer is no. If it can’t be replaced or replicated or has some super-special meaning, then it might be a good thing to keep. If it was a toy they played with constantly that would be expensive to replace, it also might be good to keep. I’m thinking of Thomas the Tank engine, his 5.8 miles of track, 389 friends, and all those buildings. They will still be good, solid toys 200 years from now, although the glue will have gone wonky and the colors faded.

There are lots of places to donate clothing and other items, with Salvation Army and GoodWill being the two most famous. Because of the volume of donations they receive, these organizations will send badly damaged clothing to fabric recyclers, especially blue jeans. While you can claim a tax deduction for anything you donate to charities like these, that is only for items in good, usable condition. While you can leave worn out jeans, old socks, and underwear, you cannot claim them on a tax deduction because they are not in good, usable condition. Make sure to take photos and keep a list of donated items.

You might be wondering why I would encourage you to donate jeans that are in poor condition to Salvation Army and Goodwill. It’s simple: It keeps it out of landfills. Because they receive such a large volume of donations, they are able to send items to recyclers where an individual person might not be able to.

You can also give clothing to a friend with a child who’s a little smaller or sell them at a yardsale. To my surprise, I had people buy my kids old underwear. They were super cheap and the buyer shipped them to a third world country where their church had missionaries. That is a happy reusing of something I viewed as garbage!

Most of these are clothing, but toys, sports equipment, furniture, school supplies, food items (plates, utensils, etc.), and more can be outgrown. When that happens, some may be so beat up that throwing them away or putting them in out in the recycle container is the only reasonable choice. Others go to charity, just like clothing. But some can be resold.

When you put things in a consignment store, they will keep them and try to sell them for a certain period of time. If they sell, you receive a portion of the sales price and they receive the rest. If they do not, most will either donate them to charity or dispose of them in some other way. This should be disclosed to you when you leave items there.

My younger son and I started taking old books, movies, and video games to a used bookstore near us. We’ve had great fun buying new-to-us items with the proceeds. They offer a choice of cash or store credit. Naturally, we get more value when we choose store credit. With new DVDs as low as $.95 and books also under a dollar, our money goes pretty darn far. Any items they aren’t interested in buying for resale, they will also make donate to charity, if you don’t want to take them home.

Yard Sales and Beyond

I recently found out about “Virtual Yard Sales” on Facebook. I really like the idea. I like it more than Craigslist because the groups usually require an admin to approve membership, making it easier to ensure that people really do live in your area – and making it harder for weirdos and creepers to get involved. (This may not be an issue for you, but it might be a concern when you think about the rest of your family.)

Actual yard sales, multi-family yard sales, swap meets, estate sales, etc. are great ways to sell stuff you don’t want, and to buy new-to-you things. This can be a great way to work on negotiating skills, something few people in this country are good at.

Ebay, Craigslist, and other online auction and bartering sites are also good places to dispose of unwanted items that still have good value. This could definitely include “collector’s items” that you don’t want, especially your own childhood toys.

The Wise Dad gets “guy magazines” like Car and Driver. When we periodically throw out a stack, I toss them into the car, then deposit them at the school for the art teacher. They use them for collage projects. This is something that is literal garbage for us, but a treasure for the art teacher. She mostly receives magazines like Cosmo, so you can imagine how happy the boys are to have Road and Track instead!

Be careful that there are no weapons or people in skimpy clothing because those violate the rules at many schools; fitness magazines, including ones targeted at women, often have women dressed in skimpy clothing, so they probably won’t be allowed.

Teachers are always happy to receive books they can use in their classroom and any kind of school supplies. My children managed to amass easily 100-150 #2 pencils that are decorated for various seasons, movies, and who knows what else. They have piles of temporary tattoos and several bags of those rubber band bracelets from a few years ago. All of this is garbage getting in the way, filling drawers, and generally annoying me at home. In the hands of an elementary school teacher, they are prizes to be given students for behaving and reaching goals.

When you receive a package in the mail, it often has yards and yards of scrunched up brown paper. The art teacher was happy to receive this (smoothed and folded first) for class. I have also donated oddball objects like cardboard inserts from shoes, plastic handles from cardboard boxes we recycled, and piles of temporary tattoos we acquired over the years. In the hands of an art teacher, these turn into fun new recycled art projects.

Recycling is something most of us do today, but it is possible to do more. Is it good for the earth? Of course. But it’s good for your wallet, and it’s a good lesson for your kids. When they start out, they probably won’t be able to afford new items immediately. If they have been shopping, or even just donating, at stores like Goodwill or your local consignment store for years, shopping there will be second nature to them. It will help them furnish their new “nest” without breaking the bank, going into debt, or taking all the things they need from your home.