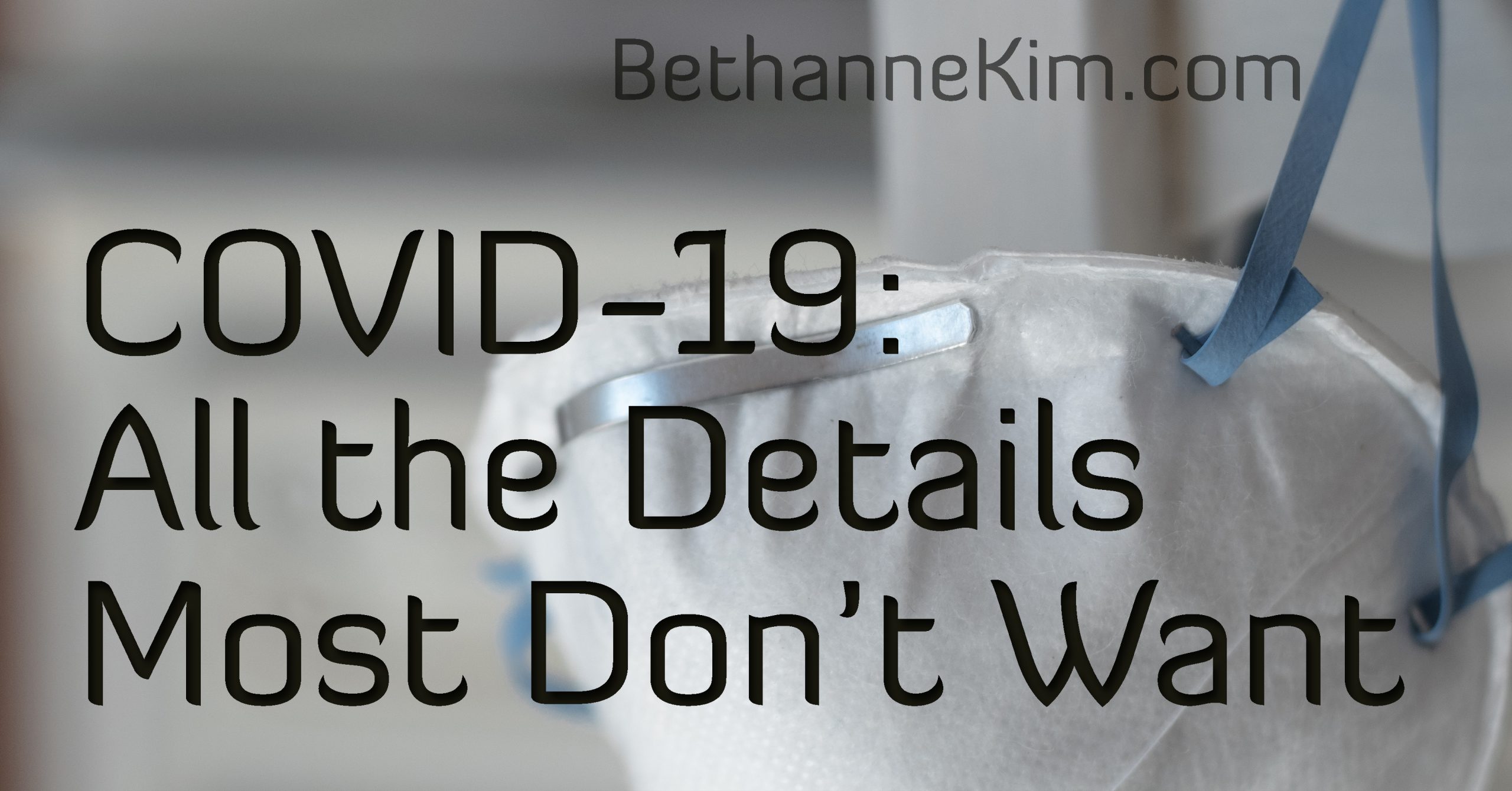 COVID-19: All the Details Most Don’t Want

My mother-in-law was diagnosed with COVID-19 on April 29th. Most people speak in generalities, and how things feel. This is specifics – her O2 levels, lab results, and other clinical details that most people don’t know or ask about. I will keep updating it as her story unfolds. (Because of HIPPA, there is no way to get an image of her in the hospital. The image used here is a copyright-free image from the US Navy and FEMA. Mema was treated in a regular civilian hospital, this is just a good picture.)

Mema (that’s what the kids call her) lives in a nursing home. She moved there a year and a half ago from the adjacent assisted living facility. The combined facility, including a rehab area and memory-care wing, has nearly 300 patients plus the staff needed to support them.  They sent out a request to families on March 6th requesting they not visit, then on March 13th they stopped allowing visitors except very limited visits for end-of-life. Many specialist staff such as (I’m guessing on the specifics here, but it’s an educated guess) podiatrists, physical therapists, and others work at multiple residences because none of them need them full-time but they all need them regularly. Her residence stopped allowing people to work there if they were working other places. They stopped having group gatherings including communal meal times and group activities. Staff were wearing PPE, and they had enough on hand thanks to pre-planning. In short, they were doing everything right, as far as we could tell, and they had no known cases among staff or residents until the week ending April 17th, two months after they went into lockdown. So while she was in a high-risk environment, this was going to hit eventually, and that’s just the stone-cold reality of something this contagious.

Since she has been there for so long, her nurses know her well. On Friday the 24th, they noticed she wanted to stay in her room more than usual, but everyone has a sleepy day sometimes, including Mema. When the nurse came back on Monday and she was still the same, they became concerned and were monitoring her more closely. By Tuesday, they knew her oxygen levels were low and put her on 2 liters of supplemental oxygen. Wednesday morning, it was clear that wasn’t enough and she wasn’t doing well, so they sent her to the emergency room of the local hospital around 10-11am and called to fill us in.

Wednesday: When we called the hospital shortly before 3 pm, she was still in the ER and had tested positive for COVID-19, to no one’s surprise. They told us she was weak and grumpy with a high white blood cell count. Based on her labs and kidney function, she was deyhdrated. She was NOT in any kind of respiratory distress since her nursing home had gotten her in so quickly. She was on 4 liters of oxygen and that was sufficient to keep her within a safe range of O2 (95%), although not quite to normal range. They said they would put her on antibiotics but didn’t think they would put her on hydrochlorquine. They confirmed she has a DNR (Do Not Rescusitate) order.

She was given either the Brief Interview for Mental Status (BIMS) or a similar test at her residence on a regular basis. I told them her recent results: a 7 out of 15 in December, at the top end of severe impairment, and a 2 on February 24-25th. The 2 could have been a very bad day, but her general level is in the 2-7 range, so they know how little to expect of her in terms of cognitive ability.

Her dentures didn’t come with her from the nursing home and they asked several times if she could walk by herself. Those facts tell me that she hadn’t moved really at all on Wednesday morning or her dentures would have been in, and that she had been bed-bound since she got there, since they hadn’t seen her walk. (She can walk, usually with a walker.)

Thursday: She was agitated, refusing to eat, and moaning a lot. She is a woman who will eat pretty much anything, so a refusal to eat is a huge red flag for her. Her O2 was increased from 4 liters to 6 liters. She was on azithromyacin and a second antibiotic, plus plaquinil and they weren’t helping.

The bigger problem was that she was going into kidney failure – Acute Kidney Infection (AKI). Her creatinine levels were still going in the wrong direction and they were involving the nephrology team (kidney specialists). The next step was either an oximizer or high flow oxygen. The doctor said she wasn’t communicative, which could be caused by the hypoxia from the COVID-19.

I forget how they phrased it, but they were gently nudging us to think about end-of-life decisions, and it was genuinely a gentle nudge. We confirmed (again, and not for the last time) that she has a DNR and is not to be put on a ventilator.

I did some research online about COVID-19 and kidney failure. I found that 3-9% of those with COVID-19 develop AKI and that particular co-morbidity has a 92% fatality rate without being a 91 year old diabetic. However, everyone who knows her agrees that if anyone can beat a mortality rate in excess of 92%, it’s Mema.

Friday: Because I have her medical power of attorney, I was able to get access to her “MyChart” information online so I can at least track her vitals. I am annoyed that her other test results don’t show up but I can see her current vitals and her weight.

Since they were asking about end of life decisions, my husband and I talked and agreed that the best course, if they get to a point where they can’t help her, is to take her back to the COVID unit at her residence so she can pass in familiar surroundings. We called their admissions staff and had a conversation with them about it. They will stay in contact with the hospital so they are prepared for her return, recovered or not.

The nurse said there wasn’t much change but she now has a person sitting with her to keep the oxygen on because she keeps taking it off. She was on 6 liter O2 flow and ate some applesauce. They changed her to a “non-rebreather” oxygen mask. She was also moved from a regular room to the ICCU – Intermediate Critical Care Unit.

Saturday: She has been complaining of being very cold. They took her up to 15 liter O2 and her kidney function has returned to normal. Yeah for kidneys working!

Sunday: There has been no improvement from Saturday and they ordered a chest x-ray. She is on 15 liter flow 100% O2, which is the highest they can give her without intubation, which goes against her wishes. She still has no fever and her kidney function is still improving. Her inflammation marker has gone down but her sodium is high and potassium is low. She doesn’t want to do anything.

Monday: She is fairly stable but constantly pulling the O2 off so they have put her in soft wrist restraints. With the O2 supplementation, she is in the safe range for oxygen but without it, she goes down into the 60-70% range and her lips quickly turn blue. The chest x-ray shows the opacity/pneumonia is worse. She can’t swallow safely so they are giving her IV fluids in addition to IV antibiotics and will re-evaluate her ability to eat tomorrow.

Tuesday: She is more awake and responsive today and her kidneys are functioning but she still can’t eat or drink safely. At 152, her sodium level is high enough to worry them so they are using a gentle IV with fluids, with a nephrologist (kidney doctor) consulting. Pneumonia is the same. They have to be careful giving fluids to COVID-19 patients because too much easily leads to shortness of breath.  The inflammation marker (Celiac C protein, if I understood correctly) that had gone down to 73 on Sunday went up a bit to 88 on Monday and then quite a bit more to 113 today. Her sodium is at 152 and her white blood cells are at 12.7.

I called to see why I can’t get lab results on her MyChart page. The person I chatted with sent it for review to get that fixed and said to contact them again if I don’t have it by the end of the week.

A different doctor called after dinner. He said that Mema was struggling to breathe. She was suffering and she dying as we spoke and that they need to change what they were doing, with our permission, to allow her to pass. We talked to him to understand their plan, and agreed to it. The plan was to give her morphine to calm her down (she was agitated), then remove her soft wrist restraints – something we really wanted to be sure was done before her passing – and reduce her O2 from 15 liters to just enough to keep her comfortable. Without any supplemental oxygen, they said her O2 was dropping into the 50s. They said she might pass in as little as a few minutes, but a few hours at most. They did not expect her to last the night, and she didn’t.

We all called to tell her we love her before she passed.

In the end, it took her about six and a half hours to pass. She went peacefully, resting comfortably.

Previous Post
Quarantine Prep by the Fistful: 5 Items at a Time
Next Post
COVID-19: My Views In a Nutshell