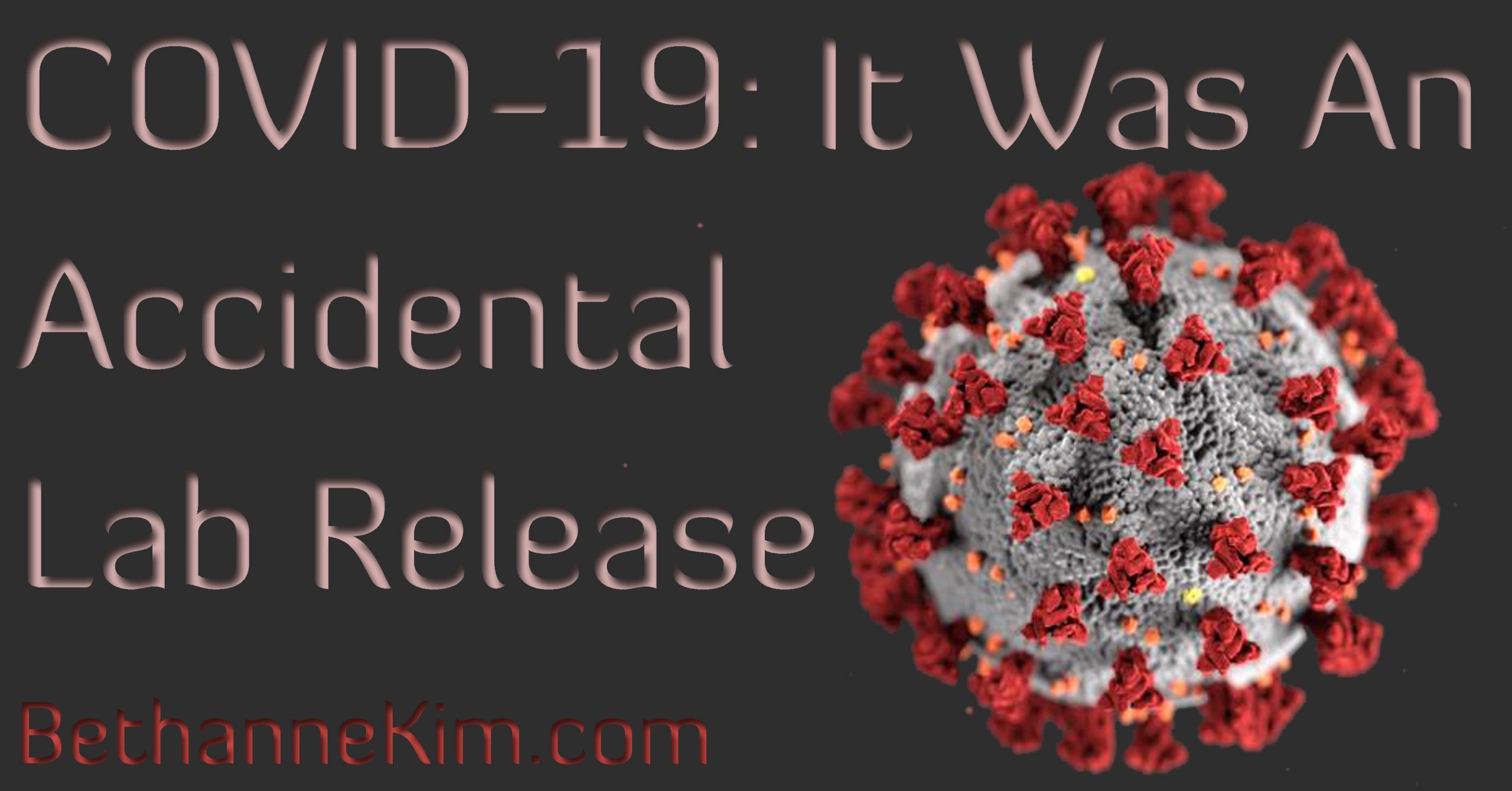 COVID-19: It Was an Accidental Lab Release

Every government around the world panicked in January/February. Travel was restricted, quarantines happened, economy-destroying orders were enacted. The flu happens every year and other viral outbreaks happen every now and then (SARS, MERS, Ebola, H1N1, etc.). This hadn’t happened before. Something was different this time. It can’t be something specific to one country like wanting Trump out of office (US) or to silence protestors (China) because those wouldn’t have caused virtually every other country to panic as well. I believe, based on what I have read, that the world governments had a high degree of confidence that this was an accidental lab release. I don’t think they believed it was a bioweapon or quarantining would have been more rapid, although they have to have been concerned that it might have been if they did believe it came from a lab

One point I believe everyone is in agreement on is that the origin of this particular coronovirus was bats. In particular, there are four species of bats in a complex of caves in Yunnan Province that Zheng-Li Shi (China’s “Bat Woman”) was studying. Horseshoe bats found there carry a virus that is greater than a 96% match. The next closest match is 88%. The Professor found that 3% of people they tested living near the Shitou Cave in Yunnan had antibodies against SARS-like coronaviruses but hadn’t either handled wildlife, a result which has made scientists rethink their belief that coronaviruses can’t leap directly from bats to humans. According to most comments, Zheng-Li Shi personally seems to be extremely careful about following safety protocols, but she is not the only researcher, and the BSL-4 rated Wuhan Institute of Virology is not the only place in Wuhan studying bats.  (A BSL, or Bio Safety Level, 4 lab is the highest lab rating for studying the most dangerous diseases.)

The second lab is literally across the street from the wet market at the epicenter of the outbreak. It’s the Wuhan Municipal Center for Disease Control & Prevention (WHCDC). That is a BSL-2 (not 4) lab and even in the field, their teams do not adhere to the same rigorous safety protocols. Tian Junhua led these efforts and was renowned for it until after the outbreak, when his online presence. They were clearly aware of the danger of their work and attempted to stay safe, but the reality is they were operating in a BSL-2 lab and it simply didn’t have the same safeguards to prevent disease transmission to workers. Unlike the Wuhan Institute of Virology, they also collected and housed live animals, including bats, although it is unclear if any came from Yunnan. However, it seems that even though the Wuhan Institute of Virology is a BSL-4 Lab, they also did at least some bat coronavirus studies in the BSL-2 labs.

No one (including me) can argue with the logic in this Bloomberg.com article and elsewhere that someone from Yunnan could have gotten the virus and traveled elsewhere. The problem with that logic that the virus didn’t show up in Yunnan or anywhere between there and Wuhan before, or even at essentially the same time, as it showed up in Wuhan. Yunnan is 1000 miles from Wuhan.* Given how incredibly infectious it is, the extreme improbability (really, impossibility) that a traveler would have had zero contact with other people or left fomites behind, and that it is infectious during pre-symptomatic or asymptomatic times, this doesn’t seem like a realistic scenario. And honestly, even the Chinese government hasn’t put it forth as a likely scenario in the six months they have already been studying it. Given that, it seems safe to rule out.

*Yunnan is a province and Wuhan is a big city, so parts are less than 1000 miles and some are more.

This also goes to the theory that bats infected another species, most often with something called a pangolin suggested, that went on to infect humans. (Snakes were also initially suggested as a possible intermediary animal but have since dropped out of favor.) To quote from the same article:

One early clue of bats’ role came from a 1998 outbreak of brain-infecting Nipah virus in Malaysia that killed more than 100 people. It turned out that fruit bats with the virus were feeding on mango trees overhanging a pig enclosure, according to the EcoHealth Alliance. The bats dropped fruit into the pens and infected the pigs; the pigs then passed the pathogen onto people.

If this had happened, there should have been a cluster of infections. Clearly, there was in Wuhan, but the wet market that was at the center of their outbreak didn’t sell bats. The origin of the pangolin theory, specifically, was a single press release from South China Agricultural University and experts weren’t convinced by their study. For example, they are concerned that the samples could have been cross-contaminated and there is no information on where the pangolin with a 99% match came from. This link has responses from quite a few experts.

“Wet markets” generally sell and slaughter live animals, but the hygiene standards vary greatly in different areas. They are called “wet” markets because they are literally wet from water splashed out from containers with fish, melting ice, and blood, and from having surfaces hosed clean. They are not the same thing as wildlife markets. The Wuhan Seafood Market that was the initial epicenter of the outbreak does has a wildlife section in the market that sold snakes, beavers, badgers, foxes, porcupines, and other wild animals. It didn’t sell bats because bats aren’t a popular food in Wuhan.

The origin of the story about bat soup was an article in The Daily Star which they quickly “corrected”. Bat soup was an old dish and folk remedy that wasn’t eaten much anymore until a blog called “Beauty and the Bat” brought up a surge in popularity. She has since apologized for encouraging others to eat bats since her blog started in 2016 in videos, like the May 2016 video circulating of her eating a fruit bat in Micronesia.