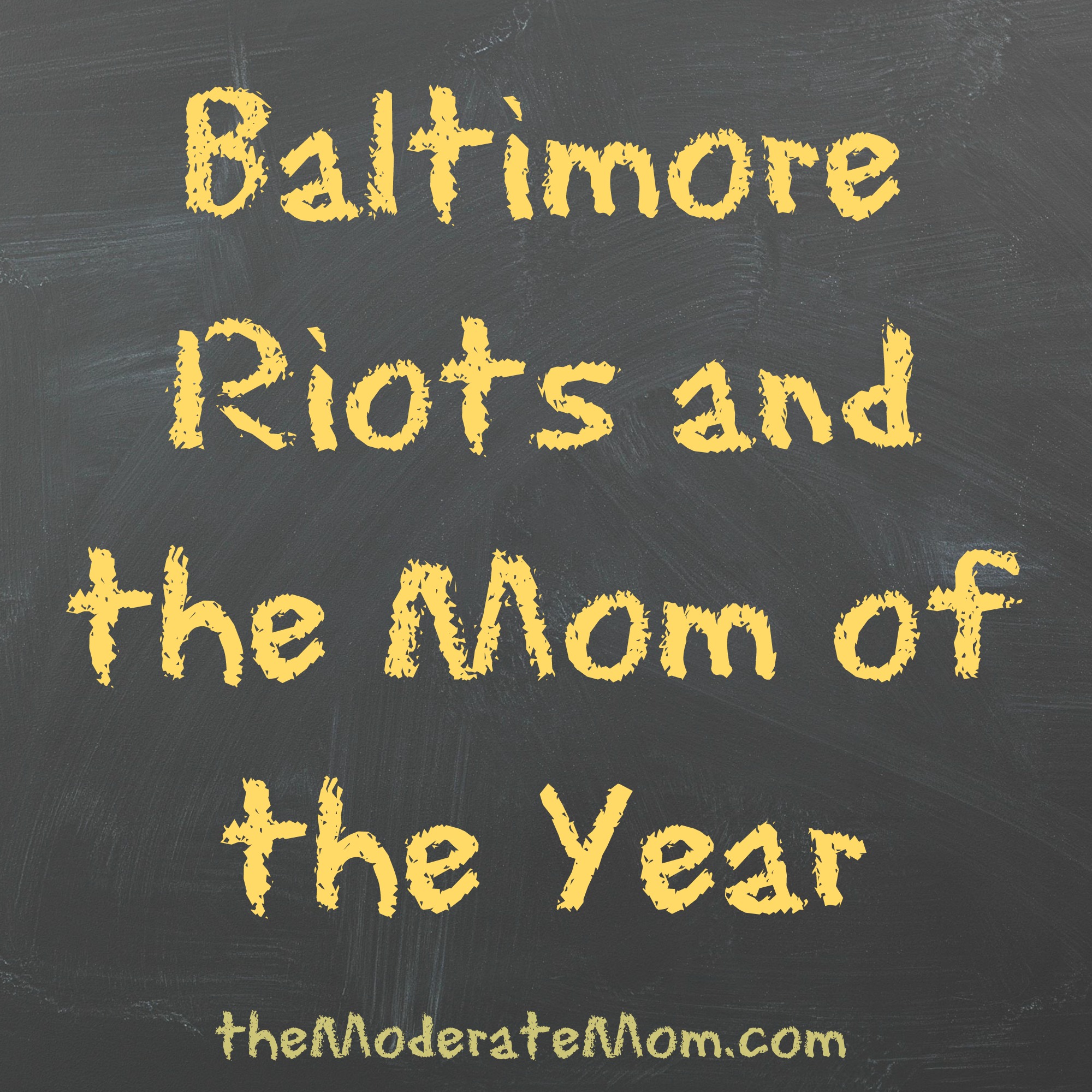 Baltimore Riots and The Mom of the Year

If you haven’t seen the video, just search for “Mom of the Year”+”Baltimore Riots”. It’s a mom cussing out her fully-grown (but not adult) son and hitting him when she found him out with the rioters. He goes home with her and not a single rioter tries to interfere with the Mama Bear making her errant Cub go home.

Most comments are complimentary (Mom of the Year!), but a few say if she had been doing her job all along, he wouldn’t be out there. Really? He’s a teen – they rebel. They test boundaries. They bow to peer pressure. It’s normal, no matter how good a parent is, for teens to do things they were raised to know better than to do.

But what if, as a young child, he was particularly stubborn and the only thing that got through to him was physical punishment like a spanking? I have lived in a Baltimore row house – sounds carry. And it’s no secret to parents that CPS and police can consider any form of physical punishment, most especially including spanking, to be abuse.

To be sure, spanking can be extremely upsetting – for some kids. But those kids probably respond to far lesser punishments, so their parents aren’t likely to be spanking them anyhow, unless they actually are abusive. Frankly, it’s not 1960. If a kid is being abused, odds are good that it will become apparent.

So what does this have to do with politics?

The Nanny State has decided that it knows best about how to discipline kids. Certain forms of punishment are not acceptable, ever. In some cases, they are right. But in those cases, it is already illegal as assault and battery or another crime. Spanking or slapping another person won’t get anyone thrown in jail (barring some other extenuating circumstance) because it isn’t really dangerous, just uncomfortable and possibly embarrassing.

My point is not that parents should start spanking and slapping their kids, willy-nilly. My point is that when parents are afraid that the state will take their children if they (the parents) step out of line when disciplining their child, among other things, in the opinion of an authority figure (CPS, doctor, police officer, teacher, administrator – the list is VERY long), then parents stop disciplining their children out of fear of losing that child to The System. And if you don’t know why that terrifies any parent, then you must be living under a rock.

What if he wasn’t at a riot?

My point is that this “Mother of the Year” would have received a very different response if she had done the exact same thing and it had not been in the middle of a riot. If she had simply been trying to keep her teen home on a regular Monday because she knew he was running with a bad crowd, the response would have been that her swearing and hitting him was the root cause of his violence.

My point is that The System needs to change so that control of the family and how it is run is returned to…The Family. Let Mama Bears rule. Unleashed Mama Bears can do more to restore order and control bad apples than any army any nation ever fielded.

My point is that swearing or yelling at kids sometimes, when parents have reached the end of their rope and the kid is sawing on that lifeline, is not going to turn them into hoodlums. Swatting them upside the head or on their backside (the kind of blow that is more embarrassing than painful) will not make them violent.

Creating a world where parents are afraid to discipline their kids because someone might turn them in to CPS or the Police and they will lose that child to the Foster Care System? That is a much faster track to turning kids into hoodlums because that is a fast track to kids having no one to discipline them at all.

I don’t know any parents who don’t fear CPS, no matter what their color or how much money they have. I know one family who stops to make sure their child is clean before taking them to the ER because if the kid is dirty from an afternoon playing in the yard, they will probably be reported for neglect. (I would say the rulemakers think it’s better to have kid clean in front of a TV than dirty playing in the yard, but that would imply more thought went into the policy than is likely.)

And you know what? They are right. Unless there is an immediate danger to their child, putting off going to the ER for a quick shower is probably the right choice to keep their child safely at home. How sad, and frightening, is that?

The people running these programs and setting the policies aren’t bad people. Letting your child be filthy all the time is neglect – but seeing them dirty one time does not mean they are always dirty. Instead of looking for patterns, they are taking single kids based on single instances. They are looking at a set of “free-range” kids whose parents have carefully taught them how to be safe and given them rules and guidelines and responding as if the parents dropped them off with no instructions, information, or practice.

I think the bureaucrats have the best of intentions, but good intentions aren’t enough when the end result is destruction. We, as a nation, need to return control of our kids to their parents and legal guardians.