We start teaching our kids about stranger danger when they are toddler so most know they shouldn’t get in a car with a stranger or take candy from one. If your “little one” is now a black belt with some serious unarmed self-defense skills or a 200-pound linebacker, you may have stopped worrying about stranger danger, but the threat doesn’t go away when they are teens. It simply changes.

Think back to your own teenage years. Social isolation is a powerful weapon and teens can be easy prey for groups (including gangs and cults) that make them feel secure as part of a larger group. The internet has changed the nature of this threat a bit, but it remains true. It has also altered the nature of social isolation. I joke that the only reason we know our teenager hasn’t gone mute is because we hear him talking to his friends online. They genuinely connect and bond using the internet, and I do the same as an adult with my own friends. Of course, we all know there is a dark side as well with cyber-bullying happening anytime, anywhere and the ability of predators to get to kids without anyone knowing.

Any group (or person) that wants to separate anyone from their friends and family is almost certainly a danger to them. That is an important lesson to learn because it is true from infancy through extreme old age. This is true even if they know some, or most, of the people in the group, and it is true even if it is a family member. If they have learned to listen to their instincts, they can be a good guide as to whether a group is good for them or not. 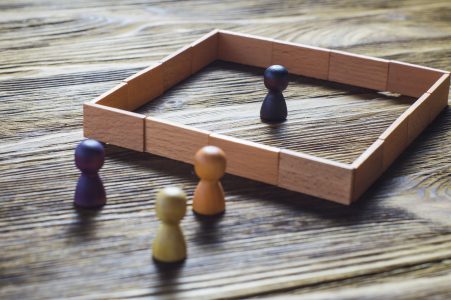 Family may try to separate kids from their friends if they are a bad influence, but they won’t try to take away everyone who loves and cares about them because their family loves and cares about them, even if it doesn’t seem like it every day to a hormonal, moody teen. Parents will almost certainly be happy to have them hang out with old friends, even if they have “fallen in with a bad crowd” recently. They don’t want to cut them off from everyone, just some specific bad influences.

Dangerous groups want to separate a person (adult or child) from the people who truly know and care about them. True friends and loved ones try to stop people from doing bad things. This isn’t just true for kids. Sometimes, Bad People target old people that they believe have money, property, or something else they want. They push everyone else out of their life to make sure that when that person dies, they inherit everything of value, so this isn’t a danger that stops. Ever.

With kids, groups or individuals can do the same thing. They can make a young person believe that their parents and friends don’t care about them, especially if they have been fighting. Even the most loving parents and best friends sometimes do and say things that can sound like they don’t care. That includes saying “I don’t care!” but when a person says that to someone they care about, it almost certainly means they don’t care about the subject, not the person they are talking to. But a Bad Person can make a child (or teen, or adult, or grandparent) feel like it’s about them. After that, they convince their victim to give them their valuables–computer, car, college savings, retirement, bank savings, etc. Sometimes the group that does this is a gang that then gets your kid to go further and commit crimes.

Sometimes the person or group trying to isolate your child is a kind of religion called a cult. Cults often demand their followers worship their leader as God. If anyone demands you or your child worship a living person as God, run as far and as fast as you can and never, ever go near them again. It’s no secret that cults are extremely dangerous.

A cult’s first choice of prey is socially isolated or troubled people. This may be nothing more than the normal short-term isolation that can happen when we are angry and shut out others, but cults are skilled at manipulation. They can exploit this momentary weakness and turn it into months, years, or even a lifetime split from those who love and care about a person.

Who to Talk to

Having a solid faith is a good protection from cults, but the best protection is to have multiple layers of people who love and care about us. For teens, Dad and Mom should be the closest layer along with close friends. Then grandparents, siblings, good friends, aunt, uncles, godparents, and other trusted friends, family, and adults. Ideally, there will be more layers after this, including teachers, youth leaders, friends, parents of friends, and more.

Everyone, including adults, gets mad at their parents and those closest to them sometimes, and everyone has struggles in life, even kids. When that happens, it’s invaluable to have someone else in that very close circle to talk to. Having multiple trusted friends and family members is important because different problems need different perspectives. Sometimes other teens really do understand better than adults. If they need to talk to someone else about their problems, it doesn’t mean they don’t love or need you anymore. It could even be as simple as the other person happened to be there when their stress reached a boiling-over point and they had to talk to someone about it. Getting mad at them about it is the least productive reaction possible.

Think back to your teen years. Is this something you would’ve talked to your parents about? Really? As much as I loved and respected my parents, even as a teen who would never have said that, there were things I just would never have talked to them about. There were other things were I did talk to them, but they didn’t listen to what I was saying, so I eventually stopped talking about those topics, so make sure you really listen when they do talk – especially if they are repeating the same thing over and over. That means its important to them and they don’t think you are understanding what they are saying.